The Transformers BotBots are divided into various teams (31 and counting!), based on what store in the mall they hail from. For instance, in the first section of the mall, there were two home and garden stores, both bringing us the members of the Shed Heads; the one upstairs on Level 2 was more about tools, while the one downstairs behind the escalator seemed to be selling more plants. And rocks? You know rocks are pretty much free, right? Like, if you see a rock and you want it, you can kind of just pick it up and be on your way. They're a valueless item, like bank pens or your friends' lighters or Amazon boxes on any porch.

This isn't just a rock, though: it's a rock with moss on it! 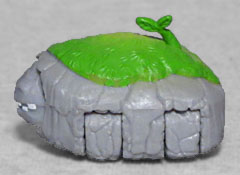 Well that changes everything! Do you know how hard it is to gather moss on a stone? You have to not roll it - specifically not roll it! They have a saying and everything. Here's a linguistic fun fact for you [I sincerely question your definition of the word "fun" --ed.] Shut up! Linguistic fun fact! While the American interpretation of the idiom entreats people to keep moving, to engage in the hustle, the British take it as an admonishment to settle down and take things easy. Same phrase, opposite meanings, based on whether or not you want moss.

BotBots are not hard to convert. Toughest thing here is fitting your finger inside to push the head out after you unfold the legs. Don't forget to flip the little sprout back to be a tail, too.

Slobber Rock is hyper, drooly, and very loyal... just like a puppy! Sometimes he gets too excited to see the other bots and accidentally knocks them over, 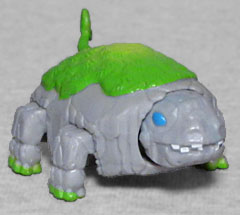 but overall, he pretty much rocks. Except at rock/paper/scissors, which he always loses.

Ah, yes, a "puppy." With its rounded shell, its wide-set legs, and its head which can retract into its body. Like a puppy would have. Despite the bio comparing him to a puppy, this is clearly meant to be a turtle - real ones get algae and dirt on their shells in real life just like this. Hey, it's your toy, you can pretend it's whatever you want. The robot mode is cute, whatever animal it is, and the moss is painted different shades to keep it from being flat and boring. The toes are also green, and the eyes are blue. There's no real articulation, unless you want to count pulling the head back into the shell or wagging the tail. 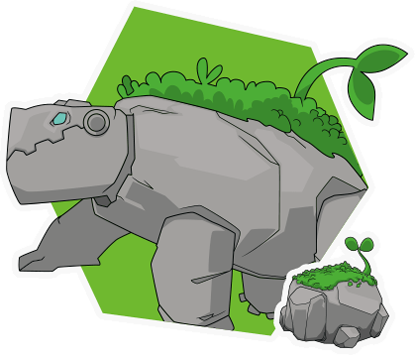 Slobber Rock is only available blind-packed, as #16 in Series 1.