I know the toys you played with as a kid were always smaller than you remember them being, but this is ridiculous!

Pop culture icon and American hero GI Joe battles it out against the nemesis Cobra Organization, in micro size! Now available in the world's smallest size ever, 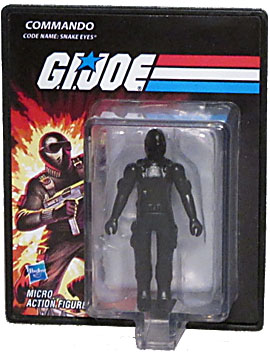 measuring only 1.25 inches tall, each Micro Action Figure has three points of articulation, and includes a replica of the original action figure blister card, for display and storage, display stand and accessories.

There's a company called Super Impulse that has a line dubbed World's Smallest, which takes old toys and re-creates them in miniature. I have the World's Smallest Rubik's Cube, for example, and it's only ¾" across - about the same size as one of the squares on a real Rubik's Cube. World's Smallest was originally sold via blind boxes, but they're recently branched out to toys in clamshell packaging that lets you see what you're getting ahead of time. The line covers toys and games of all sorts, and is now even doing action figures, which is where this Snake-Eyes comes in.

The "blister card" is, as the promotional copy says, one of the accessories: after you rip open the clamshell, you'll find the fully plastic "card" inside. A hatch on the back hinges open so you can remove the figure. The front does look like vintage Snake-Eyes, with his old card art (which is more than we can say for any of the World's Smallest Transformers, since those were never sold on blister cards), but the back just has the iconic cover of GI Joe #1, rather than a filecard and cross-sell. 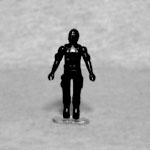 Open the hatch and a little tab allows you to pull out the tray holding Snake-Eyes and his bagged accessories. The figure stands 1¼" tall, and has a level of sculpted detail to match - this is the earlier, inferior Snake-Eyes, not the superior 1985 version, so there already wasn't much to see here, but now there's even less, by virtue of being ⅓ the original size.

He does have accessories, though. They're bagged behind him in the tray. What's he got? A clear stand to help him stand, an infinitely small black Uzi that he can really hold in either hand, a satchels of explosives he can sling over his shoulder and a pair of binoculars (he'll have to wear those last two like a purse, because the strap isn't large enough to fit over the head). World's Smallest Micro Action Figure Snake-Eyes has three points of articulation: the neck and the shoulders.

There are so far three GI Joe releases in the World's Smallest line: Snake-Eyes, Duke, and Roadblock. What, no Cobras? No Scarlett? This is a strange little oddity, more a conversation piece than an actual toy, but we still look forward to what else they've got in store. It's kind of neat to have action figures your action figures can play with. 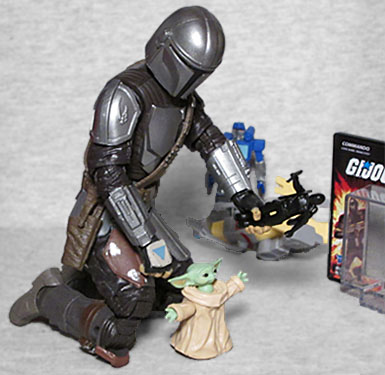