Dig Dug was originally a standalone game. Released in arcades in 1982, 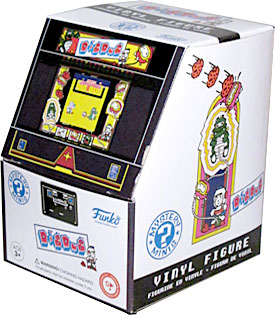 it was ported to pretty much every home system in existence, and continues to be included on compilation releases today. There are sequels, though, and eventually it was tied in with two other franchises: first was Mr. Driller, based on a scrapped idea for Dig Dug 3; that game's protagonist, Sasumu Hori, is Dig Dug's son. And Mr. Driller's mother/Dig Dug's ex-wife is Tobi Masuyo, the main character in an obscure 1985 game called Baraduke (or Alien Sector) that had a similar setting to Metroid but beat them to the "surprise, our main character is a girl" punch by a year. A further retcon established that the alien rescue mission from Baraduke and "the Dig Dug Incident" were two parts of the same larger situation. Pretty complex story for something that started with "dig in dirt, make enemies go die."

There were only two types of enemies in the 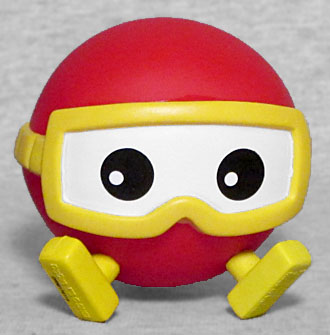 original Dig Dug: Pookas and Frygars. Pookas are big round things that look like a kickball wearing a dive mask. The Pooka Mystery Mini has a perfectly spherical body (which is true even before you inflate them in the game) with its goggles sculpted all the way around it. Three little appendages stick out the bottom of the body - the two yellow ones are feet, while the white one is supposed to be a tail, though it's often depicted as a wind-up key in more "realistic" art. They're all extremely square here. Frankly, the Pooka doesn't look threatening or sinister at all - in any other game it could be a friendly character, or possibly even the star. In fact, if the last enemy in any level is a solo Pooka, it will try to run away to safety rather than let you kill it.

Frygars, however, are dragons, and look mean 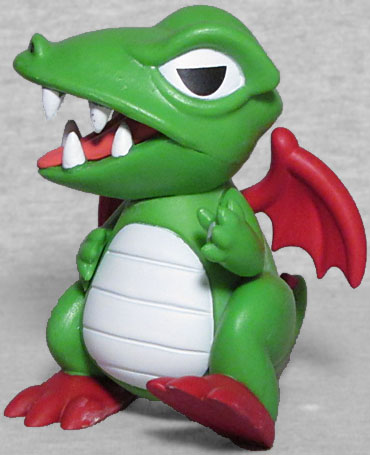 from the get-go. They've got the ability to breathe fire at you in the game, allowing them to attack you from a distance. And through walls. (Usually you just die if one of the monsters touches you, and they have to turn into ghosts to get through the solid areas of the ground and into one of your tunnels.) This is a tubby little dragon, with a green body, white belly, and red wings. He's also got red feet, which makes it look like he's wearing socks. His lizardy mouth is open, revealing his tongue and pointy white fangs. The ridges above his eyes make him look angry, and the bumps where his nostrils are raise up above the surface of the snout. There's no articulation, but he's sculpted looking to the side, raising his left hand, and lifting his left foot to take a step. Turn him around, and you'll see three small spikes running along the length of his tail.

The Retro Videogame Mystery Minis are larger than you'd expect, and come in packaging designed to represent the old arcade cabinets - you can tell which game a Mini will be from, but not which figure is inside the box. If you want Taizo Hori, Pooka, and Frygar all together, you'll have to grab all three Dig Dug boxes from one case (good thing all the figures are available in a 1:12 ratio). 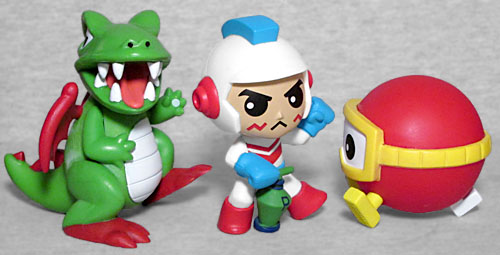