This is the latest in a series (of indefinite length and regularity) of blog posts memorializing cancelled toys. Our figure today is Bandai's Mighty Morphin' Power Rangers Rita Repulsa.

Rita would have been part of the "Evil Space Aliens" part of the line, and was shown at Toy Fair '94 along with the rest of the first series (such as Eye Guy). 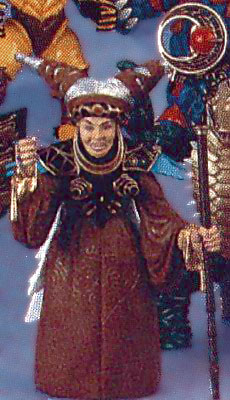 The toy was never produced and, this being the early '90s, there was never any comment from the company on why. Hopefully for some better reason than "girls don't sell." At least one customizer has produced a kit based on the prototype, but the real thing was never made. It took until 2011 for there to be a Rita Repulsa action figure, and until 2020 for there to be a good one.

This entry was posted in addendums, Bandai, cancelled toys and tagged Power Rangers. Bookmark the permalink.