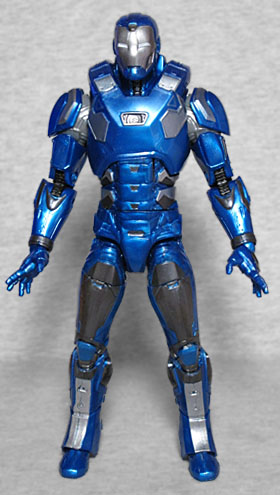 Okay, that joke worked better when it was Deadpool, because Deadpool really didn't need any explanation. This figure does. The mold is the same as the Starboost Iron Man, just done in blue and silver instead of white, grey, and gold. The Atmosphere Armor is something actually in the game, but, as you may be able to tell by the fact the bio on the back of the box only presents the generic Tony Stark developed his cutting-edge Atmosphere Armor to defend the world against catastrophic threats, the game's skins really are only cosmetic, having no bearing on gameplay. This ain't your daddy's PS4 Spider-Man, where different outfits grant different abilities - that effect is limited to the Gear you can equip, though that doesn't change your character's appearance. So really, all this is is "blue Iron Man."

a little, and that's the alternate head. The Series 1 Iron Man didn't include a Tony Stark head, but this one does. The game isn't based on the movies, so this isn't supposed to look like Robert Downey Jr. And it doesn't. It's just some guy with black hair and a thin beard. I needed a Tony head for that shot in the Hall of Armor, and figured this would be it; nope, turns out it's too gigantic to look right on the suit body. You'd be amazed at how much variety

there is in the size of unmasked Tony heads.

The figure comes with open hands or fists, but no energy blasts to fit in the palms. More importantly, he has the right arm of the Build-A-Figure Joe Fixit, which might help sell a few more figures than would otherwise move.