Forced to fake his own death after his secret identity was made public, Matt Murdock was able to remain Daredevil and continue punishing the criminals 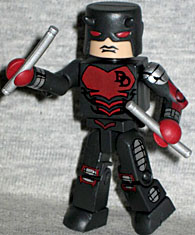 of Hell's Kitchen by adapting a radical new armored costume.

Man, Matt Murdock's secret identity is the worst-kept secret in the Marvel Universe. Spider-Man once unmasked on live tv broadcast worldwide, and there were still fewer people who knew who he was than Daredevil! This is definitely a "radical" costume, in that it's outdated, tied to a decade that's long gone, and an embarrassment today. It's not a terrible redesign - the thin, angular armor on his shoulders, wrists and legs suggests his ninja roots - but it just smacks of "exxtreme '90s makeover." This would work well for an "Anti-Daredevil," the way Spidey's black suit worked well for his evil opposite. All the details are painted on, which is nice: if they were making this today, they probably would be sculpted add-ons.

The mask is the same one the original Daredevil had, which means it's missing the chin strap that made it look more like a helmet. Sadly, his face is still painted with the blank eyes - when he was wearing this costume, Matt adopted the identity of con man "Jack Batlin," and he had contact lenses so no one would know he was blind. Rather than the batons the previous DD Minimates had, he's armed with the escrima sticks from the Nightwing Minimate. He wore them strapped to his forearms, but there's no way to do that here.

Empowered by the ancient spirit of the moon, Marc Spector 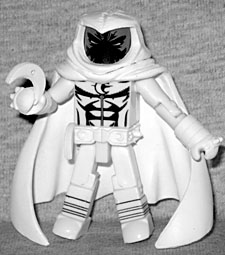 patrols New York's dark alleys and forgotten corners as Moon Knight - the Fist of Khonshu! His brutal tactics and fearsome reputation make him a very real threat to criminals everywhere.

Moon Knight's dominating feature is his huge cape. It was reused for several later figures, but originated here. The cape is twice as wide as the figure and wraps around him impressively. There are, however, two problems: first, the front of the cape comes down lower than the feet, so it tips him over backwards; second, the hood is shaped to fit specifically down against the neck of the cape, so you can't really turn his head at all. He gets new gloves with spikes on the knuckles, and a new belt with two pegs where you can attach his "moon-arangs."

I mainly got this set for Daredevil - after all, I once made a custom armored version, so I'm down with the terrible '90s costume. Moon Knight looks really great, but has a few design flaws that bring him down. Neither of these guys are high on the "likely remake" list, so if you're interested, this set is yor best option.