Remember when we told you that between Series 1 and Series 2 of the Transformers BotBots, there was a bonus series featuring two new tribes? Batter Splatter was from one of them - the Bakery Bytes - and today we've got a member of the other, the Lawn League.

It's not really clear what sets the Lawn League apart 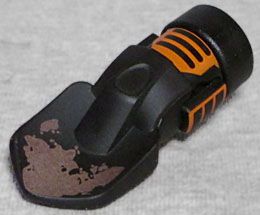 from the Shed Heads - they're both a mix of plants and garden tools. This is one of the latter - a simple trowel. Well, technically a trowel is flat, so the curved head of this tool reveals it to be a spade, but who's that pedantic about garden implements? It's much more common to call a spade a trowel, no matter how the saying goes. It's black, with a few orange details and a bit of color-change paint on the tip that is supposed to blend in with the rest until it warms up, but it never really gets that dark, so really what we see is a light spot that gets slightly lighter.

Even in Series 1½, BotBots are easy to convert. Tip the shovel back, pull out the arms, and twist the base around to show the feet.

Since Series 1½ was an exclusive, none of the characters have ever been shown on the website or in any merchandise, so there's nothing even resembling biographies for them - they don't even get to appear in the mall, just being dropped into lines down below 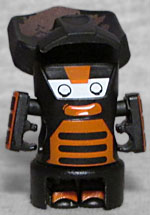 the scene. So in order to tell anything about them, we have to examine the art on the package. On the front, Mucker Von Diggs is just standing there with their hands on their hips, and on the back, they've fallen head-first into a bag of mulch and gotten stuck. So... overconfidence getting them into trouble?

There isn't much to the bot mode. The head and body are basically just a tube, with only the arms breaking the line. The flap that covers the face (actually just a white panel with two outlines for eyes, nothing detailed) could kind of resemble a sun visor, if you squint just right and pretend real hard, but the spade part of the spade sticking off the back isn't anything other than kibble. There is a little more orange in this mode, and it sticks out nicely from the black. The only articulation is the shoulders.

Mucker Von Diggs is only available in one of the two Lawn League 8-packs, so you've got to get that one if you want them. This "half"-series was supposed to be a Toys "Я" Us exclusive, but ended up going to Amazon when TRU closed, meaning you can't pick out the set you want; the best you can do is order and hope. Or order and keep returning until they send you the one you want, but that takes a while and you seem much more likely to get the non-Mucker set.