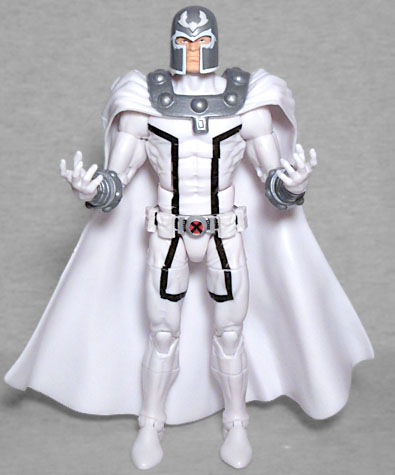 Magneto forges an unlikely partnership with Xavier in pursuit of a lofty common goal: the protection of all mutants.

If you accept the premise of House of X, that the new history we've been given has been true all along, then you really have to wonder why, considering that this is meant to be a collaboration begun more than a decade ago, Magneto spent so much time trying to kill the X-Men. Was it all an act? Did he lose faith in Moira's plan? Presumably there will eventually be a story that explains that.

His HoX/PoX costume is basically the same one he was wearing after the Schism storyline, just with sleeves this time and an older style of cape. Technically there should be ribbing on the side panels, but that would have required a new body mold. He already got new forearms, because those have re-use potential. The silver helmet is new, too, though that seems unneceesary - the last one would have worked just fine.

His only accessories are alternate hands - gripping, gesturing, fists - and the head of this series' Build-A-Figure Tri-Sentinel. Well, three heads, but just one mold.