The Phoenix Force has arrived on Earth, and the Avengers' plan to stop it has failed. Iron Man's massive suit of "Phoenix Buster" armor has unexpectedly split the entity into five pieces, each possessing a different X-Man. Led by Cylcops, the Phoenix Five wield absolute power, outlawing the Avengers and driving them underground. It will take the entire Avengers roster to stop them, including the Scarlet Witch and Protector, but how can the team defeat five Phoenixes when they can barely survive a fight with just one?

Iron Man tried to destroy the Phoenix and instead gave its power to five people instead of one? Nice job breaking it, hero. This is the famous Phoenix Killer 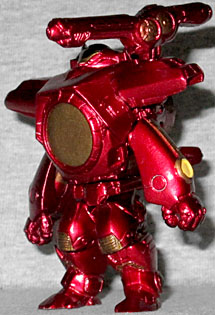 Armour (because apparently whoever did the graphic design on the box was British), famous because it was repainted into Deadpool's Phonics-Killer Armor. And why "killer" anyway? Why not "Phoenix Buster," which is what the back of the box called it (and also fits with naming conventions)?

The Phoenix Buster Armor, in the comics, was blocky and huge - like wearing a double-decker bus. For once, the Minimate toy is more organic and rounded than the character it's representing! Hard to believe, huh? But compare this armor, with its digitigrade legs, rounded arms, angled shoulder pads and distinct head, to the much more comic-accurate HeroClix version, and you can see the difference. Even the big gun on his shoulder is a different design! If Art Asylum had made the armor match the comics, fans probably would have blamed them for making it too square.

To be properly in scale, the armor would have to be, like, 7" tall - when we said it was like wearing a bus, we meant it. But that's outside the scope of the Marvel Minimates license, so instead the front half of the armor flips up, revealing a normal Minimate body tucked inside (so really, the entire "body" of the armor is more like a complicated hat). If you strip all the extra pieces off - chest cap, gloves, belt, thigh armor and boots - you're left with a nearly plain representation of Iron Man's "Bleeding Edge" Armor. And luckily, the set includes replacement hands and feet, so you can finish off the look!

Despite its name, the first Avengers vs. X-Men box set was packed 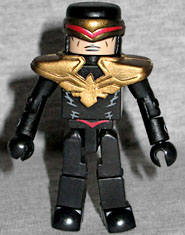 with nothing but mutants. So you might expect that this one is entirely full of Avengers, right? Well, not quite: there are three Avengers, and also Cyclops.

As host of the Phoenix Force, Cylops got an altered costume. It still has a black bodysuit, but it's now adorned with bird-shaped armor over the chest and shoulders. The armor in the comics was red, but on the toy it's golden - maybe they were afraid someone would mistake him for a New 52 Nightwing Minimate? He does have his red belt, it's just the chest that ends up the wrong color. His visor is also new: it's shaped vaguely like a bird's beak (though it should also stick up a little higher in the center on top.

Being filled with the Phoenix Force gave Cyclops control over his powers, so if you remove his cowl, you'll see his eyes. They're still red, and they have fire coming out of them, but at least he's no longer blasting uncontrollably. Sadly, he has no hair, so you can't really display him that way unless you take someone else's. 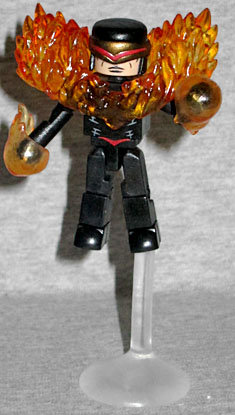 Rather than include a flamebird base to show Cyclops using his new powers, AA has included a new piece that fits over his torso and shows fire rising off his shoulders. It's translucent orange, and looks really nice in place. He also includes two fireballs for his hands, the same that the Marvel vs. Capcom Magneto Minimate came with. Unfortunately, they're a little too loose on his hand, so they tend to fall off unless his arms are raised; similarly, his feet don't want to stay in the legs, and the holes in the bottom are too large for the included hover stand. In short, the quality control on this Minimate isn't as good as it usually is. Maybe the molds were wearing out. 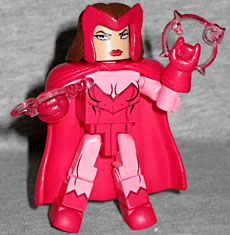 This is our second Scarlet Witch, and she's wearing the same basic costume: a red swimsuit over a pink leotard, with red boots and gloves. The boots and gloves are shorter than on the last figure, and there's more detailing all over. She also gets flared cuffs for the gloves. Her cape is new, as is the hair piece, with the M-shaped headdress molded on. To show her magical "hex bolts," she gets new hands (later reused for Dr. Strange) that have translucent pink energy circling them. 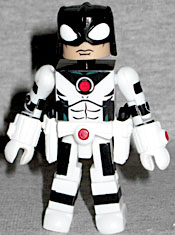 Although this set was ostensibly put together by a "fans' choice" poll, this figure really makes that hard to believe: nobody knows who Protector is, much less cares about seeing him in a box set. Maybe people clicked on him by accident, assuming it would take them to a page explaining who the heck they were looking at? Well, that's why you read OAFE: to learn. He's the once and future Marvel Boy, just wearing a terrible new costume. It's reproduced excellently on this Minimate, it's just a bad design, a white suit with rectangular black panels. The mask, gloves and belt are new, and he's armed with two copies of Dr. Doom's gun. If you want to remove his mask, he also includes Bucky's hair, painted white.

There were six potential figures in the poll - three X-Men and three Avengers - and every Avenger who was up for voting made it into this set. In a logical world, both AvX four-packs would have been split 2-and-2 or, failing that, this one would have had four Avengers to balance out the four X-Men in the other one. But the X-Men went through a lot more new designs during the story, so maybe there really weren't any other Avengers they could have put in the set to make it interesting.