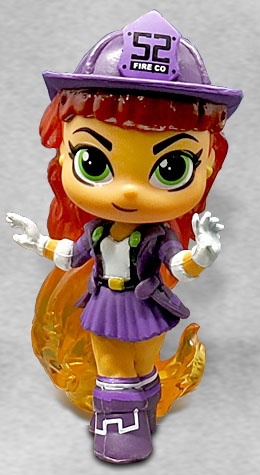 Starfire didn't really appear in the Bombshells story at all - even Katana, who's got my back. I would advise not getting killed by her. Her sword traps the souls of its victims was only on a few pages of the story, has more going on than Koriand'r does: she shows up in a single panel Bombshells United #6 (#12 if you're reading digitally), helping fight a fire because she can fly, and then again in issue #38, where she "belongs to no nation, and she loves the Earth, and protects its creatures." Even then it feels like she was only thrown in because she had a statue, not because she mattered to the story.

Despite that, Kori ended up having two very different Bombshells looks: Red Hood and the Outlaws #32 had a variant cover depicting Starfire as an attraction at Haly's Circus - 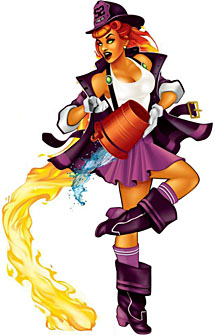 it doesn't really say what her attraction is, but she's toasting marshmallows over her own hair, so maybe she's a fire-eater? Anyway, that showed her wearing a frilly showgirl costume, while the statue (and thus this Mystery Mini) depict her as a flirty firefighter. The statue sees her kicking up a heel as she dumps water on a small fire started by her hair, while the Mini is just sort of walking forward. The little one's jacket also isn't falling off coquettishly, though we can still see the green gems on her suspenders. The hair was molded from translucent yellow plastic, with increasing red paint as it moves up toward her head - it reaches low enough to touch the ground and curl back up, adding stability to her pose. Her eyes are the normal style for this line, which is a little problem: Starfire's eyes were depicted as solid green, not with distinct pupils and irises.

Starfire is a Specialty Series exclusive, so she was only available in cases that went to places like your local comicshop. As with the other two, she's available in a 1:12 ratio.