Building an army just got easier. 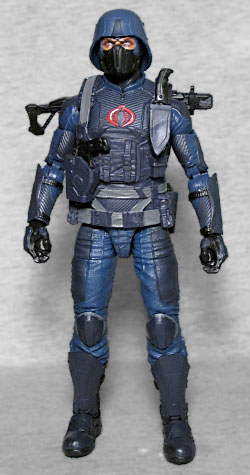 Today we reviewed the Target-exclusive "Special Missions: Cobra Island" Cobra Trooper, only about a year after it was originally released. But Hasbro recently (aka "at the same time as Zartan") released a second, mass-market edition of the Cobra Trooper. With a few key differences. For starters, this one's technically called "Cobra Infantry." Not that anyone will call it that.

The mold of the figure is identical, but the paint on the mass release is different. The uniform is a lighter blue, and has darker panels on the arms and legs. Plus, instead of being solid black, the webgear is now molded from a dark blue plastic and gets several grey paint apps to help bring out the detail. (Plus, specific to my figures, this one actually has the knife sheath on his chest that the exclusive was missing.) The Cobra emblem is brighter, and they darkened the skin around his eyes, making Cobra more ethnically diverse than most real-world militias. It also means we can tell it's this version that's in that stop-motion Snake-Eyes trailer, not the rarer, more expensive original.

All those extra paint apps came at a cost, though:

the accessories. The mass market Trooper doesn't have goggles, doesn't have an armband, doesn't have the sniper rifle... all he gets are the helmet, pistols, knife, and long gun. That would be fine, if the Target exclusive didn't exist and we didn't know what all it was supposed to come with. 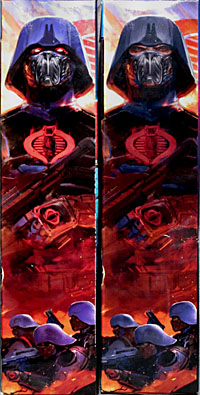 The packaging has changed, too. This release gets a different number in the line (24 vs. 12) and has the usual character collage on the back instead of a look at Cobra Island. The most surprising change is to Kekai Kotaki's art on the side of the box, though: the large portrait looming above the crowd has been darkened, a reversal from the actual paint on the figure, and where the exclusive had glowing red eyes, this one just has human skin. How odd! Both get the same stats, logically - Foot Soldier, Light Weapons, Hand-to-Hand Combat and Sabotage, all at Level 1. Because they're the new grunts, so they wouldn't have specialized skills yet.

It's almost like Snake-Eyes, where mixing and matching parts from two figures could give you a better toy. This new one does look a bit better, but the other has better accessories. Of course, if you do get both, you can do like we suggested and pretend one is an Officer, and that's why he gets better equipment. 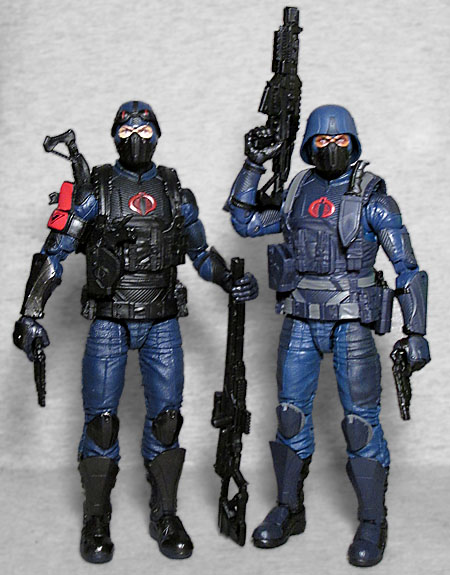