When the Transformers BotBots line started, there were only eight tribes, but 12 stores in the mall. The Toilet Troop were present up on the third floor, and down on the ground floor; that latter one is where you can find today's review. 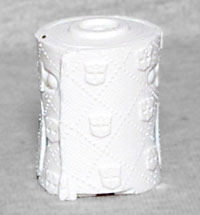 Hey, a roll of toilet paper! We should have reviewed this one a year and a half ago, when everyone was going insane trying to buy the stuff. This is just a single roll, not an entire package, and not an especially large one: none of that Ultra/Mega/Super roll nonsense here, just a normal roll of poop-tickets. There's a texture molded into the surface, because quilted TP works better than smooth, but not a lot of toilet paper brands have embossed Autobot symbols all over them. Would those mean this is Autobot toilet paper, or Decepticon?

BotBots are simple to convert. All you do here is open the flaps over the face, pull the arms out to the side, fold down the panel on the waist, and pull the legs out of the bottom.

King Toots uses his toilet paper to play pranks on other bots, like wrapping them up or giving them a scare. This helps him hide the fact that 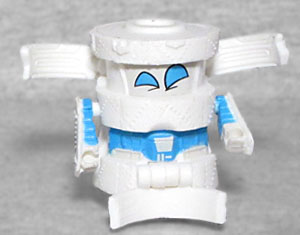 even though he's a toilet paper mummy, he's terrified of germs.

Scared of germs? We really should have reviewed this guy a year ago! The fold-down flap over the stomach does allow us to see more of the bright blue interior, but it also continues a flaw a lot of the BotBots have: it hides the feet, and makes the robot look weirdly thick. Maybe folding upward would have been better? The kibble sticking off the sides of the head isn't great, either. The blue eyes are shaped to make it look like he's laughing behind his wrappings, suiting the playful nature the bio describes. 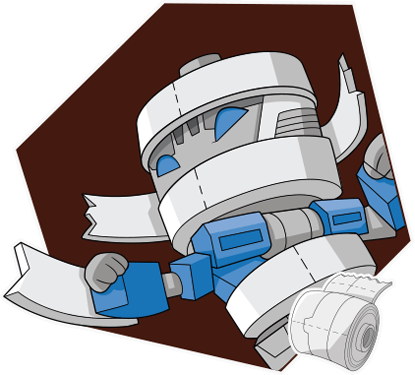 King Toots is available in two Toilet Troop 5-packs, or two Jock Squad 8-packs. Because why wouldn't you want toilet paper to be plentiful and easy to get?