The Spoiled Rottens can be found discarded all over the place in the Transformers BotBots mall - this one, for example, is near one of the trashcans, up on Level 3. 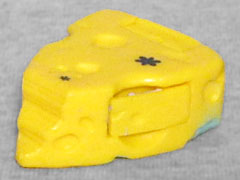 But who brought a wedge of cheese to the mall in the first place? We know there are a lot of improbable stores in this mall (looking at you, Science Alliance), but a cheese shop? Nuh-uh. This is a big chunk of swiss somebody brought with them from home. It's vaguely triangular, with curved sides and soft corners, and a single large bite seems to have been taken out of the tip. There are molded dips to suggest holes, and blue and black splotches painted on for mold.

To convert this cheese, pull the arms out to the sides, fold down the legs, and open the flap over the face.

Holey Moldy is a big fat stinking liar. Every story he makes up 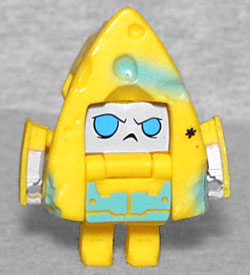 is full of holes and could never have actually happened. He gets annoyed that no one believes him, but it’s his fault that he stinks at making things up.

You have to bend Holey Moldy's legs back a little bit to get him to stand, because his body is so front-weighted. We see a lot more of the fuzzy blue mold in this mode, which is nice, though the fact that his face is a gray panel set below the surface makes it almost look like something being shown on a screen. Love that pouty little frown he's got, though - it really goes along with his personality of someone nobody believes. 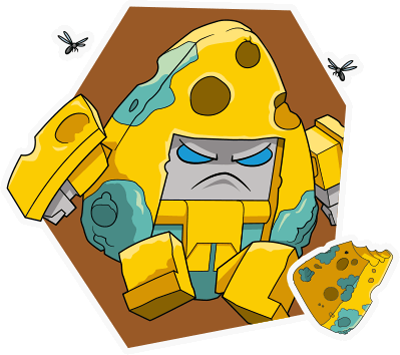 Holey Moldy is available in a Music Mob 5-pack, or a Shed Heads 5-pack.