This is the latest in a series (of indefinite length and regularity) of blog posts memorializing cancelled toys. Our subject today is ToyBiz's Frog Thor.

At SDCC 2006, ToyBiz, knowing their time with the Marvel license was coming to an end, took the opportunity to show off a lot of new product, but also a lot of things that had been planned, but cancelled. That's where we saw AoA Wild Child, the Bring on the Bad Guys henchmen, and the X-Babies, for instance. Well, one of the other pack-ins they showed off was a tiny Throg: 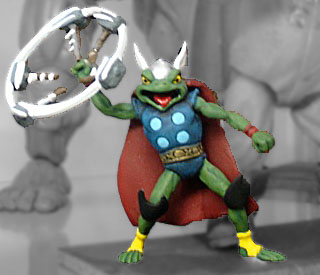 Note that Frog Thor and Throg are not the same character: when Thor Odinson was turned into a frog and then regained his powers, he also regained his stature; the book specifically identifies him as being 6'6", so he was human-sized, he just looked like a frog still. But what no one saw at the time was that a shard of Mjolnir was left behind, and another frog, named Puddlegulp, picked it up, becoming the mighty Throg. Who was frog-sized rather than human-sized. So big one? Frog Thor. Little one? Throg. 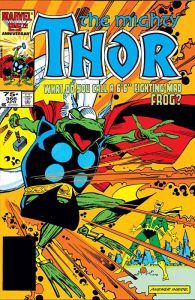 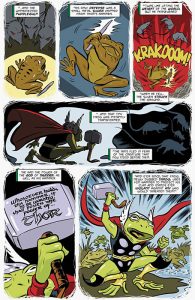 The first time fans caught wind of that Throg figure, it was already cancelled. But fast forward to 2011, and Hasbro is deep into the Marvel license. At NYCC that year, they held a panel to promote their upcoming figures, including a sneak-peek at some 2012 releases. And who should appear there but an unpainted prototype of an unarticulated Thor Frog accessory! 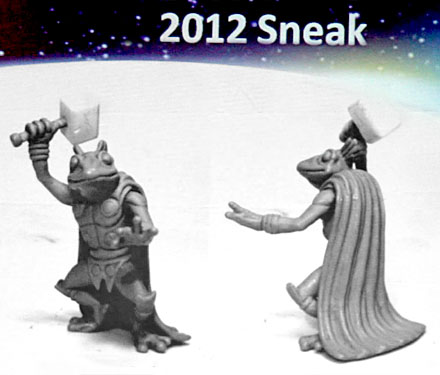 He was shown alongside figures like Black Knight and Bearded Thor, so it's not like that entire lineup got the axe, but Throg never made it.

Now that Disney+'s Loki series has stirred up interest in the Frog of Thunder, Hasbro should put together a set that would pair a 6" Frog Thor with a 1" or 2" Throg pack-in.