In 1990, programmer John Carmack figured out a way to make graphics scroll smoothly on a computer the same way they could on a console, 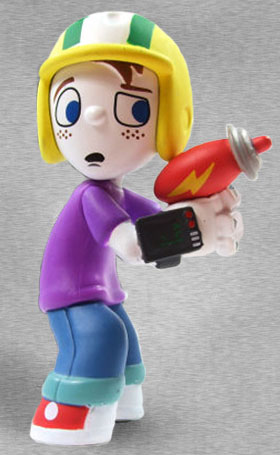 opening up new possibilities for computer gaming. He and some guys from work decided to form their own company and were soon contracted to create a three-part, Mario-style platformer in just about two months. They opted for a sci-fi theme and a child genius as the protagonist: 8-year-old Billy Blaze, who created an interstellar spaceship from old soup cans, rubber cement and plastic tubing, and now defends the Earth from alien invaders under the name "Commander Keen"!

This 1:36 Mini really stood out from the rest of the Best of Bethesda series: lots of dark, drab characters, and then this pale-skinned weirdo in red sneakers, blue jeans, and a purple T-shirt. The difference between normal boy "Billy Blaze" and space hero "Commander Keen" is that Billy puts on his older brother's football helmet when it's time for adventure. And since their father Arthur is a TV personality in Milwaukee, Wisconsin, that helmet is for the Green Bay Packers. His helmet has deep dings molded on it and several painted scorch marks, but no facemask. 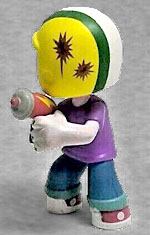 Keen is posed in a reference to the title screen from episode six, Aliens Ate My Baby Sitter! - weird, since that's the only game not currently commercially available (it was published by a different company that's since gone out of business, so nobody knows who owns the rights). He's squatting a bit and holding his blaster up in front of him, also giving us a view of the device he wears on his wrist. Unfortunately, his eyes are looking to the left, so he's glancing in front of himself rather than behind; it makes him look scared, when the game art made him look confused. Not sure why it's that way - the prototype shots had the face painted the correct direction.

Unless you're some kind of videogame historian, Commander Keen is a pretty obscure property today. The first three-parter was a giant success, and a second followed, but a promised third trilogy failed to materialize in 1992, and soon id Software was off to bigger things. Keen himself gets referenced in other games sometimes (and the Dopefish is all over the place), but a planned mobile game reboot announced in 2019 was cancelled by the next year. So the property isn't exactly "forgotten," but it's far from being well-known.