Like all the Bombshells characters, Mera has had her story tweaked to give her more emotional depth. Like, she's still the princess of Atlantis, 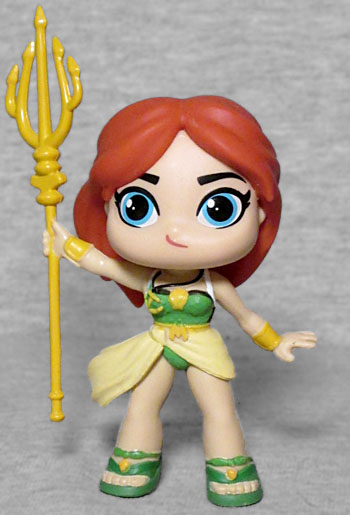 but she's been banished by the king and is suffering severe depression because of it - she uses her siren abilities to entertain Allied troops and keep their morale up, but her "flirty free-spirit" facade is just her masking the pain she's feeling. Big mood!

But in keeping with Bombshells' positive "it's okay to be who you are" messaging, she doesn't let depression stop her from being a hero, and it's not viewed as something holding her back. Would she be (personally) better off without it? Yes, that's how diseases work; we're healthy when we don't have them. But heroism is about overcoming our obstacles and doing the right thing, and that she does: when she risks her own life to save people, it's not because she thinks the world would be fine without her, but because she knows all those people deserve to live. And eventually, yes, she begins to deal with her illness, because despite what your brain might tell you, there's no shame in asking for help.

The Mystery Mini is already better than the action figure, 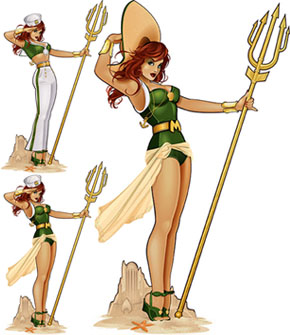 because it actually gives us the design anybody wanted. You'll recall that DC Direct put her in her unpopular sailor suit, while Funko has stuck with the more accurate swimsuit and cover-up wrap - a better choice, since it actually manages to recall her normal costume. She does not have her gigantic hat, sadly; there was probably no good way to make it look like it was blowing away in the wind. Her tiny little crooked smile is simply painted on below the nose, and while there are flat spaces where the eyes go, they're just paint as well. She's holding the big spear of Atlantis in her right hand, but it's very thin, soft plastic, and gets warped before you even take her out of the box. Fortunately, some warm water can correct that for you.