This is the latest in a series (of indefinite length and regularity) of blog posts memorializing cancelled toys. Our figure today is Mattel's Riddler.

This figure, shown off at Toy Fair 2019, is fundamentally identical to the DCUC16 Riddler, just with darker colors and a slightly different head, so it's not a real loss. Especially considering how poorly the other Target-exclusive "ToyBiz style" figures (Batman, Joker, and Poison Ivy) did. We may have missed out on some big silly accessory to go with him, but that's all. 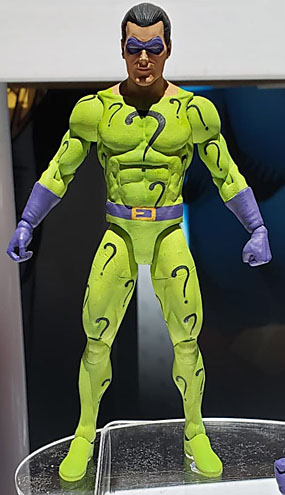 This is, as far as we're aware, the final Mattel DC figure that made it far enough into production to count as "cancelled." There were plans for Batman Forever Riddler and Two-Face figures in that Signature Collection line, for instance, but no one has ever even seen sculpts for those, so they may have never been anything more than a text listing in a store's computer system. Mattel certainly could have done much better with the line while they had it, but overall, they didn't do bad.