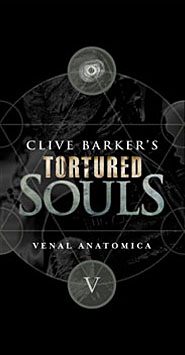 Having made the arrangement with Talisac to provide them with a creaturem the three Generals - Bogoto, Urbano, and Montefalio - returned to the Military Headquarters and waited. Bogoto was the most anxious of the three. He'd seen his share of battle scenes; bodies blown to pieces, the stink of burning hair and bone in the air: but the grotesqueries of Talisac's laboratory had left him sickened and nervous.

He decided to do what he often did when his life became difficult: he drove across the city in the night to seek the comfort of a woman called Greta Sabatier, a reader of fortunes. Though he would have been appalled if he'd thought any of his fellow Generals knew it, Sabatier's advice had been behind much of what Bogoto had done over the years, who he'd favoured amongst his subordinates, and who he'd demoted; even, on occasion, how he'd run some of his military campaigns. And as events in Primordium had steadily become more crazed, Bogoto had come to rely more and more upon Sabatier's wisdom. Her cards, he had come to believe, carried vital clues to his fate. In a world where madness was constantly in the air, and nothing and no one could be trusted, it made a paradoxical sense to seek illumination from a woman who read the future from a pack of dirty cards.

"You've seen somebody powerful," Greta told him that night, tapping one of the cards she'd just turned over. "I can't tell if it's a man... or a woman."

Bogoto pictured Talisac, hanging up from his hooks, with that vile womb of his hanging down between his legs.

Sabatier was studying his face.

"You know this person I'm talking about?"

"Well, he has friends... allies... it's hard to be sure exactly who or what they are... the cards are very ambiguous. But there's harm from this source, whatever it is."

"Harm to the world."

"That matters less to you, yes?"

"Of course. Do you think I should consider leaving the city?"

"Well... you're a military man. It's not the first time I've seen death in your cards, General."

This was the first time Greta had ever made mention of the General's profession. Whether she knew it from the cards or from the broadsheets in which he was regularly eulogized was anybody's guess.

"But I don't think I ever saw it so near to you," she went on, looking at the cards."

"So yes, I think you should consider leaving. At least until the unsettled period is over astronomically."

"They're all reflections of one another: cards, stars, palms. It's the same story wherever you look.

She sorted through the cards as she spoke, and now dropped one down on the table in front of General Bogoto. It was called The Tower, and it represented - in a simplified, even crude, form, a tower struck by lightning. Its upper half was erupting, raining down rubble, and bodies: the lower half was cracked and ready to topple.

"This is Primordium?" Bogoto said.

"It's the city's future," Greta replied, nodding. "Or at least one of them."

"So will you be leaving too?" Bogoto said, thinking to catch the woman out. Greta was as old as the antiquated table she read her cards upon and her legs were a good deal less reliable. She'd never leave Primordium; or so he thought.

"Yes, I'm leaving. This will be the last time to see me, General, unless you should move to Calyx."

"You're moving to Calyx?"

"Tomorrow. Before things get any worse."

The house on Diamanda Street, which had once belonged to the murdered Senator, had gathered itself quite a reputation of late.

There were lovers there, it was rumoured; several of them. Night and day, passers by heard the sound of lovemaking: the sighs, the sobs, the irresistible demands.

The houses nearby were all virtually deserted, their owners having fled Primordium for safer cities; or better still, for the country. Life on a pig-farm might be boring, but at least it had a chance of being long. Nevertheless people came to Diamanda Street of late, simply to hear the noise of pleasure out of the lamp-lit home. No, not just to hear. There was a feeling about the place, which got under people's skin. The energy seeping out from the open windows, was enough to make the fireflies assemble in their many tens of thousands each dusk and describe elaborate arabesques in their pursuit of one another, the air so thick with their passion, and their light so insistent, that the house was festooned with their flight paths, which lingered long after after the deed was done and the insects lay exhausted and extinguished in the long grass.

Sometimes the human voyeurs, who lingered in the shadows of the nearby houses, hoping to catch a glimpse of the lovers, were granted what they were here to see. As the strange force of the lover's din suggested, they were not natural creatures, not by any means. They seemed to be hybrids; one third human, one third metallic, one third the no man's land between flesh and devices made to strip it and slash it and scour it. They bled as they rose from their nuptual sheets; but smiled. kissing one another's wounds as though they were inconsequential, as though these flaps and sores and gougings were proof of devotion.

Word got round, quickly enough. It didn't take long for the General Montefalco to hear about the house on Diamanda Street, and the reputation it had got for itself. He went to the location, late one night. Things were in full swing: the air filled with weaving lights, the houses moaning and shaking. Then shrieks of terrible joy out of the fire-lit interior, and shadows on the blinds, moving from room to room as the momentum of the lovers' passion carried them around the house.

Montefalco had never seen, heard or felt anything like it before. A wave of something like superstition passed through his body, weakening his bowels and making his hair, which was a quarter inch from widow's peak to nape, stand on end.

He started to retreat from the house, clammy-palmed. As he did so he heard a voice behind him. He turned. It was Urbano. He looked like a man who had just discovered some truly terrible thing about himself, or God, or both.

General Urbano began to nod, but the motion was too much for his sickened system. He puked a yellowish puke, which spattered his immaculately polished boots. He took out a handkerchief and wiped his mouth; then he said:

Later that night, Montefalco went back to see Talisac. He went alone, which turned out to be a wise move. Neither Urbano nor Bogoto had the guts for what awaited him there.

The place had deteriorated considerably in the forty-eight hours since he'd last stepped over the threshold; the bodies were still everywhere, but they were in a new condition. It looked as though all the moisture, all the energy, had been sucked out of them, leaving them withered. The eyes had gone from the sockets and the lips had been drawn back from the teeth, giving them all the look of blind, squealing monkeys.

The flesh on their torsos had withered to bones; as had the meat on their arms and legs. The skin itself was now like a thin layer of dried tissue, covering the structure of the bone. When the dwarf Camille appeared to greet Montefalco, and kicked a couple of the sorpses aside, they rolled away from her kick like so many paper mannequins.

"Is it done?" Montefalco asked her.

"Oh yes, it's done," Camille said with a twinkling smile, "and I think you're going to be very pleased."

A voice emerged from the shadows, speaking words Montefalco could not comprehend.

"He's asking me to unveil it," Camille said.

The General scanned the dirt-walled room, looking for what 'it' might be; and there at the end of the chamber he saw a monumental form, covered with a threadbare tapestry obviously brought down from the floor above.

"That?" he said, not waiting for confirmation before approaching it. As he strode through the bodies, they cracked beneath his heels, erupting into dust and fragments. Soon the room was filled with spiralling bits of pale human stuff.

Montefalco grabbed hold of the tapestry. As he did so, Camille named the thing - 'Venal Anatomica."

The General pulled off the tapestry and revealed it.

As might have been guessed from its scale beneath the carpet, it was of heroic size, nine feet tall or more. It had death's face, and was equipped with a variety of medieval murder weapons. There were nails crudely hammered into its shoulder and leg. Blood had coagulated around the nails, but when Anatomica began to move (as now it did) fresh blood bubbled up from the wounds and ran down his body.

"Does it know me?" the General asked.

"Yes," said Camille," it is ready to obey your instructions."

Talisac spoke, and Camille translated. "He says he has no loyalty to its Creator, only to you, General Montefalco."

Montefalco beckoned to it.

The creature made a hesitant step. Then another.

"Can I come with you?" Camille said.

Montefalco looked down at her nakedness. "Only if you cover yourself up," he said.

She smiled, then went away to fetch herself a flea-bitten fur coat.

They went out into the night together: the three of them. The General, the Dwarf, and Venal Anatomica.

Daybreak wasn't far off. Neither was the end of certain things. Though Greta Sabatier had been killed by the bandits on the road to Calcyx - a fate she had not forseen - she had been right about that much. An age was coming to an end: and it was the Age of Lovers. 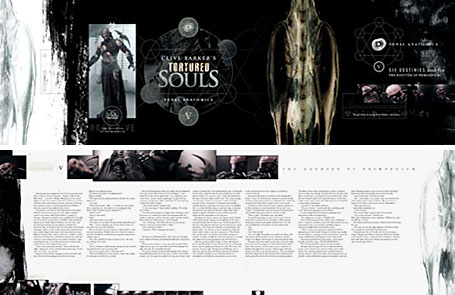