Well, the first exclusive figure for BotCon 2011 was revealed today, and it's Dead End: 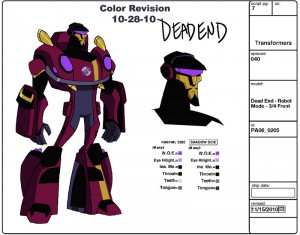 Don't know who Dead End is? He was the maudlin, depressed member of the Stunticons back in G1, so it looks like Animated is getting some Stunticons of its own!

This entry was posted in BotCon, Hasbro and tagged BotCon 2011, Transformers. Bookmark the permalink.