What started as a late night endeavor in the bowels of New Jersey, has grown into the world's best-selling and longest continually running line of collectible horror-themed specialty dolls. In addition to over 20 regular series and more than 12 series of Living Dead Dolls Presents, the Living Dead Dolls have successfully been translated into dolls, mini figures, plush, board games, trading cards, apparel, barware and costumes. 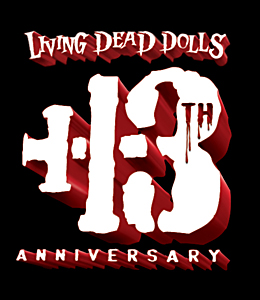 Speaking from Mezco Toyz' headquarters, Damien Glonek, one of the Living Dead Dolls' original creators, warned, "We have some thrilling surprises in store for collectors old and new! We've had many memorable moments with the Living Dead Dolls; our successful art show, our Living Dead Dolls In Wonderland book, numerous magazine articles, as well as radio interviews and much more, and we are very excited to be able to celebrate our 13th anniversary with LDD."

The Living Dead Dolls are unique not only because of their creativity but because of their fiercely loyal, almost fanatical fan base. Each series of Living Dead Dolls is a limited edition, and every series made has sold out. Fans around the globe fill message boards and chatrooms hoping to glean whatever news they can on upcoming releases and information on released editions. Loyal completist fans have even set up a worldwide network of collectors that help ship country specific exclusives to each other. It is this lovingly obsessive behavior that has grown the Living Dead Dolls from a regional curiosity into a best selling, globe covering juggernaut.

Mezco is pulling out all the stops to celebrate the 13th anniversary of their deranged playthings with a series of 13 special events, each tied to the often feared 13th day of each month. The twisted toymakers will also be releasing a number of specially branded limited-edition 13th Anniversary items. The specifics are top secret but you can bet your crypt the results will be terrifying fun.

Granted, Living Dead Dolls aren't exactly in our wheelhouse here at OAFEnet, other than one or two random selections, but there's no denying that they're one of the most successful toylines of the past decade. Think how many of your favorite lines have come and gone since the first commercial series of Living Dead Dolls hit stores in 2001. And if nothing else, LDDs have kept Mezco afloat during some lean times in the industry. No matter what you think of the weird little goth dolls, the money from those can go to support the specialty lines (like Cinema of Fear or Hellboy) that collectors care about, and for that reason, we applaud their success.

Now Mezco, how about seeing if you can get a Marvel Zombies license for the things - those we'd buy!

This entry was posted in commentary, Mezco, news. Bookmark the permalink.