The first Marvel Minimates came out in 2003, but the under-3" DC Comics license was tied up in those shit-tastic "Pocket Superheroes." Seriously, whoever designed them in the first place is one of history's greatest monsters. Those things are garbage from the ground up, and if you own even one of them, you should be ashamed. We already talked about all this, though, so go read that. It was February 2007 before the first series of legitimate DC Minimates came out.

There were two Jokers in the C3 line: a Jack Nicholson-y one 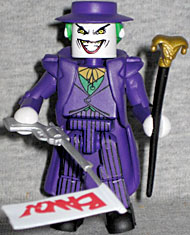 with the Batcave, and a BTAS version with the Chemical Warehouse set (which makes me realize that I really should have pulled those sets out and reviewed them in order, as well). So while those figures covered the '80s and '90s, this one is all '70s. It's based on the Marshall Rogers Joker, as evidenced by the trenchcoat and flat-brimmed hat - those were hallmarks of the era. The coat is the same one Punisher wore, but the hat is new. The face should really be painted lower on the head, but they were probably trying to suggest the huge chin that Rogers always drew. Sorry, it just doesn't work on a Minimate head. His accessories include a Joker's head cane (reused) and a revolver with a "BANG!" flag (new).

Joker is paired with Harley Quinn, because anything else 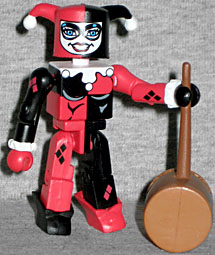 would have been... insane? Here's a Harley Quinn fun-fact for you: she was meant to be a one-shot character. In the episode "Joker's Favor," someone needed to pop out of a cake and take a roomful of cops hostage - Paul Dini thought it would be too weird to have the Joker do it himself, so he quickly created a moll to do the work, and she ended up becoming a permanent part of the Batman universe. Her costume is re-created perfectly, divided into four color-coded quadrants. They even got the diamond patterns on her limbs! The booties are new, and she has new "ruffle" pieces around her wrists. The head cap is an original piece as well, molded with tassels, and she gets to carry around her giant, oversized mallet.

Harley's hood can be removed, revealing the plain face of Dr. Harleen Quinzel beneath. It's very cool that the Harley and Harleen faces are identical: it's the same design, just backed by either white or pink. Well, okay, there's a mask around the eyes on the outer face, but that's the only difference. So she's not bald, she gets a blonde version of Batgirl's hair.

This was a really great way to kick off the DC Minimates: Harley's awesome, and even though we'd already had Jokers before, this one was an entirely different style. It's a shame it couldn't last.