Comic-Con (you know which one) kicked off tonight in a blaze of ... stuff

I got in town late and got to the hall about 20 minutes after the floor opened, which wasn't too bad as the badge pick-up line was pretty brisk and then I was able to walk into the hall without waiting.

"Overwhelming" is always the best word to describe preview night. I am always torn in three ways - must look at the company booths to see new stuff, must go buy exclusives, and must track down good deals and wanted figures at vendor booths. For the first two hours it's just a mad dash to see and do everything at once, but fortunately I was able to keep calm and focused, as it were, and work my way through the floor photographing and then purchasing as possible.

As far as new stuff, highlights include Hasbro revealing Thor, Cap and Iron Man's new costume's for the Avengers - none of which I'm crazy about, especially Cap's.

Toynami had not only the new Destructor (he's huge) on display but three new series of Futurama figures, plus an unspecified-as-to-when-or-how-it-will-be-released Gender Bender!

Mezco shocked the world by showing showing not only surprising but very cool - a new Earthworm Jim figure! There was also an Uncharted figure, which marks the first time Mezco has ever released a non-stylized human figure. Way to go guys! Welcome the brave new future of 2003.

NECA rolled out three figures for the fabled Evil Dead 2 license: Henrietta and three Ashes - Deadite Ash, Bandaged stump Ash and Chainsaw Ash. Finally, an articulated chainsaw-hand Ash! After what, 15 years of waiting? Not to be topped though, they also showed off the remainder of their Gremlins 2 figures which awesomely includes "Phantom of the Opera" Gremlin and surprisingly the Electricity Gremlin! The later is done in layers of translucent blue sheets for a really cool effect. Not sure how this'll be released but it would feel like a ripoff if he is sold solo as the sixth figure. Maybe he'll be packed with the kick-ass chrysalis!

DST unveiled a hearty portion, the most remarkable of which being Universal Monsters Series 3, which will include The Phantom of the Opera, The Invisible Man and the Metaluna Mutant. Too damned cool, guys!!!

DC Direct offered two big surprises: one is that they still exist! How is DC signing off so many rights yet still making stuff themselves? The second is the return of the "Just-Us League" figures from several years back featuring Mad Magazine's Alfred E. Newman dressed as various DC Heroes. I for one am quite pleased by this as I missed out on them the first time around.

It's not part of the convention, but there is a gallery a few blocks away from the hall that is having a whole "exhibit" of that Conan O'Brien superhero character, complete with a full-size Lego version of him! Too cool!

I did a lot more shopping tonight that I have in Preview Nights of yore and more than I expected. I basically just forced myself into "buying mode," partly because I usually spend a lot of time hemming and hawing, which causes me to lose out on some good deals. And speaking of good deals, tonight's "oh my god, yes!!!!" deal is so great it'll be hard pressed to be dethroned this weekend by something else - I got a complete set of Ren & Stimpy figures for $5 each! Hell yes!

So with that, I collapse into bed, leaving you with just this - my Preview Night haul. Enjoy! 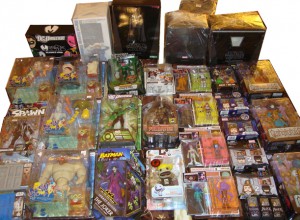