GI Joe and the Transformers #5

In today's review of the Starscream Skystriker, we said that the packaging was styled like a comicbook, pretending that the GI Joe and the Transformers comic ran for more than four issues. It's not just the front of the box, though: the artwork on the back has a little sequential story to tell. 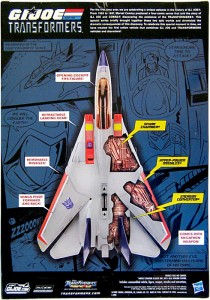 ONE:
STARSCREAM speeds through the atmosphere. EARTH is visible below him, while a FIELD OF DEBRIS is above him.

1. CAPTION: Meanwhile, in the cold vacuum of space.

1. COBRA COMMANDER: We will conquer the Earth!

FOUR:
STARSCREAM speeds away, with the EARTH below him and the MOON against a starfield above.

1. CAPTION: But another evil mastermind has plans of his own.