Rustin's Spoils of the Week #29 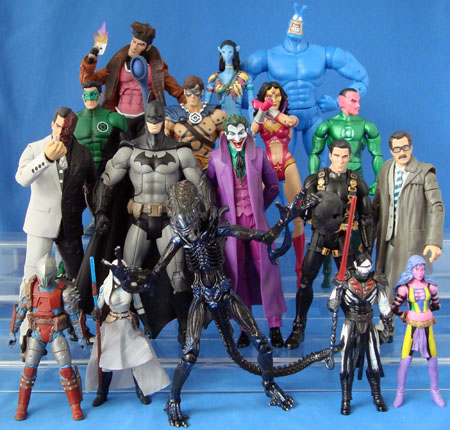 Now, this is about a third of the non-exclusive haul. The second third will be up next week while the third... third got to stay in California in my parents' attic. 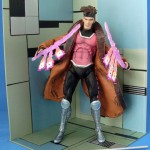 In general I've stayed clear of the Marvel Select figures. The few I have are for very specific reasons beyond the actual figures. However, from the moment I saw this phenomenal Jean St. Jean sculpt I was hooked. This is "my" Gambit, i.e. the signature version from my youth and introduction to the X-Men so that significantly helped. The color palette doesn't quite match up - the cowl portion on the chest should be blue, which i think would look much better, but based on the actual art it looks like one of those "did the Joker wear Black or Purple" arguments over shadowing. Regardless, unlike a lot of the previous non-giant figures JsJ brings a realistic sense of proportion to Gambit's body but the real star here is the face. Heads and faces can real deal breakers or makers and somehow, someway Jean just captures everything (sans smirk) that this character was for me. If only the paint was better, the lines just aren't great on the cowl. On top of that he comes with the same flimsy base as the recent Cyclops figures, but more importantly a ton of accessories! Four alternate hands (all for the right hand, two are identical), three card/energy options and his staff. Sadly, he doesn't have an alternate hand for the left side that can hold the staff any better since that hand is open a little too wide for it. An awesome, awesome figure and probably the start of me collecting Marvel Select more regularly. 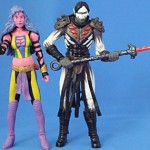 I'm not really into the Legacy comic but I can't help being obsessed with the red armor Imperial Jedis or Adam Hughes' astounding covers. Thus, a result is a big addiction to these figures. This set delivers a signature Sith and rather major but perhaps my least desired character. These are great figures considering all that the Star Wars line is. I'm very pleased that Entertainment Earth picked up these sets rather than let the Comic Pack line die, but based on the rest of the series it was obviously on its last legs. 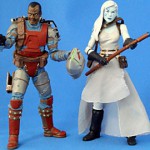 I got this set mainly because it was cheap, I didn't have to pay shipping and "fake Boba Fett" looks pretty darn cool, and when it comes to the comic packs, that's all that matters. I read the issue included with the set and still don't know a damn thing about these characters, and fortunately I don't care to. All that matters is that they are pretty good figures of pretty interesting designs. If only they had balljointed ankles... 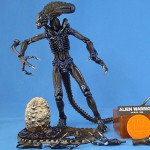 Found this for only $30, so despite being let down by the Revoltech figure from the first Alien film I couldn't pass it up. It looks much better in photos and package because it is cast in translucent brown plastic which unlike the first Alien looks pretty bad with this guy under his metallic blue paint highlights. Still though, its not a bad toy - it even solves a big problem on that first Alien by adding articulation at the spinal "prong" allowing for better head poseability. He comes with a nice base and a closed egg, plus alternate hands and forearms which are sans "fins." 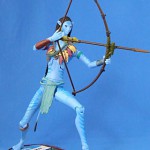 The hardest figure to get once the toys hit discount and I decided to buy in is now mine! Just a reminder of how mediocre those toys are. They just don't stand too well, but with some balance work or the base you can get it to work. She has some dots on her which are glow-in-the-dark a la the film, yet they are so little they don't really hold any sustainable glow power. 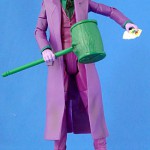 Most wanted Joker variant, least exciting execution. Almost each piece is a subtle but noticeably different shade of purple. Also, thanks to crappy neck joints this guy is forced to always be looking down rather than straight out. I am a little pleased by the inclusion of the cards and mallet. The cards will be donated to my Heath Ledger Joker while the Super Powers mallet fits better in feel with this figure. 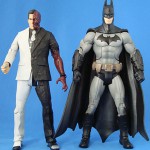 Why are these so big...? I don't really have a big problem with the varied common scales, but what does piss me off is when they set a scale and the vary subsets minimally - such as Movie Masters being 6", DCUC being 6.25" and videogames being 6.75". It just... seems cheap to me. At any rate these figures rock in terms of sculpt and disappoint in terms of articulation. Two-Face gets swivel joints rather than balljoints and nothing on Batman has the range of even DCUC figures. 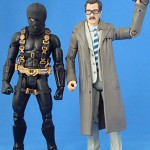 So... the Arkham City set gets two 100% new sculpts and this one gets one straight re-release and one partial reuse? Great. Thanks. All that matters is that we have a figure of Gary Oldman (aka my favorite actor of all time) as Jim Gordon. Just as amazing - he comes with a gun!!! Despite many of the Movie Masters figures being characters who need fire arms, it take Gordon to actually get one. And... it's oversized? Man, these two-packs are so bizarre. From the neck-down its a pretty good Oldman-Gordon figure, from the neck up... well I appreciate what they tried. The old Trendmasters Lost in Space figures look more like him than this. 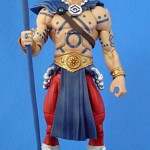 Yep, its a good figure. I still haven't opened my DCD Lantern Deputy figures so I can't do a direct comparison, but come on... it's DCUC. You know what to expect. And frankly you know if you're gettin' this or not regardless of my opinions. 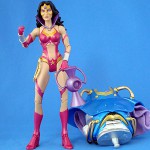 While I don't agree with this series on a conceptual level I'm not too disappointed with having two different sets of these characters - one can be a Deputy display and one will get organized into the rest of their Corps. Wonder Woman turned out better than I expected and is better than the Carol Ferris figure. Plus I really like the more comic-accurate violet lantern she comes with. 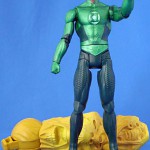 Potentially the last of the Movie Masters figures I'll buy after seeing that horrendous Parallax BAF. This is a toy of the best thing about that terrible movie - Mark Strong as Sinestro, my favorite comic villain. And keep in mind that best does not equal great, or even good, just better than the rest. Sadly the figure doesn't match up, suffering the same pointless articulation as every other figure. Never have I seen so much do so little. Plus, he also is the first to come with something other than the exact same piece of Parallax. Oh, and a green base just like Tomar Re. 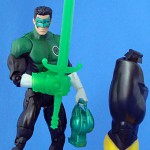 Being the only major character in the Green Lantern Classics lines he's been impossible to find, but now $30 later he is mine! And at last, Arkillo can stand! The gauntlet/sword construct is really cool but I have no real use for it as I display in teams, not in battles. It's really annoying that he lacks all the double-joints shown on the prototype, too. Still, a pretty solid figure of a necessary character. 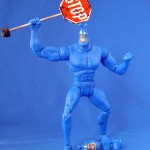 Shocker Toys, Shocker Toys... what I'd give to have been at their SDCC panel this year. It's really frustrating that they're so rough with the business side of stuff because their figures are really good (well, all I have is Maxx and both Ticks so far). The articulation on this guy is really inventive, simple and works really well. The paint on the face isn't the best and he could use some pegholes on his feet, but he still stands just fine. The alternate hands are the same sculpts just with a hole drilled through so he can hold the stop sign. I wish the left hand was down in a flat, salute-y pose to allow for much more posing variation but what are going to do. For all intents and purposes this is the definitive Tick figure! Now, if only they could get the rest of their stuff out...

16 Responses to Rustin's Spoils of the Week #29