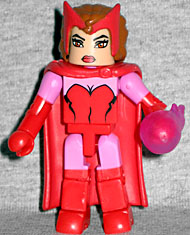 Scarlet Witch is a mutant, but she's never been one any of the X-Men teams. She started out as a villain, but that didn't work out in her best interest, so she reformed and has since been more closely associated with the Avengers, which is why the world doesn't hate and fear her. This Minimate shows Wanda in her traditional costume - she started wearing this in Avengers #75, and it's the "base" look she's returned to time and time again. The majority of the figure is molded in red - it's the pink parts that are painted. Her face is plain and doe-eyed, as was the style at the time. The cape is a new mold; so's the hair, because there was no other way to do that crazy M-shaped hat of hers. She comes with a pink version of Iron Fist's energy blob, to suggest her powers. 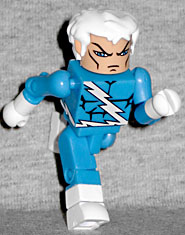 with a little bit of white paint for the gloves, boots and lightning bolt. His original costume was green, and had little pixie booties, but he donned this one at the same time his sister got hers: Avengers #75. His stripe is painted cleanly, with thin black lines to detail the edges, though it gets cut off slightly when it gets to the waist. Depending on the artist and the issue, sometimes the costume had darker blue trunks, which would have been easy to do here, but instead Art Asylum opted for the solid blue look. His white hair is a new piece, though superficially similar to Series 3's Ultimate Wolverine, and while his face does display some of Pietro's trademark arrogance, it could use more. Nice eyebrows, though.