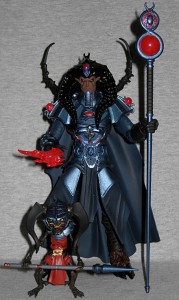 Today we take a look at Nergall, the darkest of the Scarabus variants. His face and fur are a dark brick red, while his horns and hooves are gloss black. His outfit is mostly blue, but the "cloth" parts are so dark that they almost look black under normal lighting, while the armor is more metallic. His gloves and the wrappings on his legs are matte black, and his accent color is red - a red that, depending on the light, can drift toward a darker magenta. The red really stands out against the blue, and the black makes a great base for the whole thing, so overall this is a really awesome colorscheme. His Timekeeper pieces are metallic blue, matching his armor. 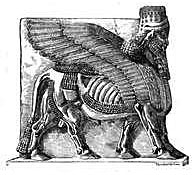 Nergal (with one L) was a Babylonian god. He's also the lead singer for Polish death metal band Behemoth, but that's probably not what the toy's name refers to. Nergal is a combination fire/war god, and also represented the sun in the middle of summer: in other words, scorching death. He was represented by the planet Mars, and when Christianity absorbed the Babylonian gods, he became the chief of hell's secret police, for all the sense that makes. 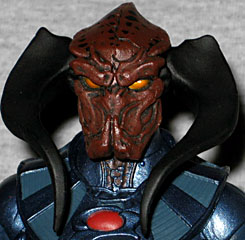 Nergall (with two L's) doesn't just get a new face, he gets a new head. Like Melchom, the new face looks alien - or more accurately, it looks Predator. The lower jaw is similar to a Predator's mandibles, looking as though it might unfold at any moment. Just as with Scarabus, the face can be removed from the head and swapped around, meaning this toy really has four different looks, not just two. The new head is a drastically different shape: it lacks the ridges and plates of the Scarabus head, and the horns are reused from Aestorath. That's a bit unusual, but it certainly sets him apart from the other variants.

Like I said for Melchom, the "alien" face does nothing for me, but the colors on this variant just look so nice that there was no turning him down.