Back when we reviewed the first Kre-O figure, we said we wished you could get the minis by themselves. Well, as you know, that dream is now a reality, and using this decoder, I picked up Sunstorm.

I'm so hot, I'm on fire! No, really. I'm actually on fire. My fusion-fueled 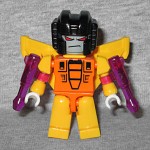 fury pulses out through my cyberalloy chassis and melts anyone who gets too close. Sure, I'm fast and powerful, but it gets lonely being so scorching.

Fondest wish: To get a hug from someone whose arms didn't immediately melt off.

Big plan: To learn how to chill

Aww, isn't that cute? He just wants love! Dreamwave made Sunstorm the first new G1 character in decades. He was basically "crazy yellow Starscream," and this toy follows suit. While all the Kreons use the same basic body (just like Minimates and Lego figures), they get specialized parts to make them look like whatever Transformer they're supposed to look like. In the case of Sunstorm (and Starscream before him), that means a pair of wings that slip over the neck-peg, a helmet designed like the classic Seeker head, and null cannons that snap onto the arms. He's got a grumpy little face, and his chest is painted to resemble a cockpit and air intakes. His central body is orange, his limbs are yellow, and his hands white. 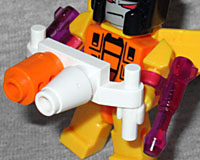 Sunstorm's arm cannons are cast from translucent purple plastic - some of the larger sets are doing the same thing, for parts that are supposed to be made of pure Energon, so we can only assume that's what this is, too. And despite the fact that he's brimming with solar-powered fusion energy, he also carries a gun of some sort: it's a white, double-handled frame with an orange and a white barrel on the front. Okay, sure.

Unlike most of the Kreons that came before them, these new blind-bagged

ones actually have multiple modes. They don't "transform," per se, because you just take them apart and build them differently, but the spirit is there. To make Sunstorm into a jet plane, you remove the head and helmet, put the wings upside down in the waist. Turn the arm guns to face the other direction, put the head back on, plug the orange and white bricks onto the top of his head, and the white frame into the back of his legs. Ta-da, you have an altmode! Yes, it looks pretty crummy, but it exists. And nobody is making you use it if you don't want.

For a cheap blind-bagged figure, Sunstorm's not bad. His altmode is 100% silly, but it's a first effort. Maybe they'll improve with time. Personally, I'll probably be leaving him in robot mode from here on out, but there's nowhere to go but up.