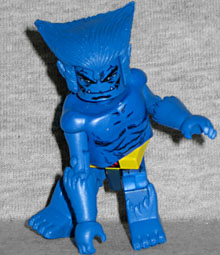 As brilliant and innovative as he is furry and blue, Hank McCoy serves as the X-Men's resident scientist, philosopher, physician, historian and combat instructor (thanks to Captain America's training.)

Beast had been blue for a long while by the time Jim Lee came to the X-Men, so this isn't really a redesign - even the costume is a return to his classic choice of tiny blue trunks. This isn't just a plain blue Minimate, however: Art Asylum has given him a "powerhouse" chest, new feet with fur running up to the knees, and forearm extenders that were originally the Sentinel's flame blast. He looks stupid if you just have him standing straight up, but in a crouching pose he's awesome. 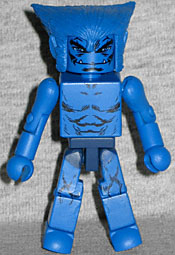 For those who have no joy in their life, all the extra pieces on Beast can be stripped down, leaving you with a more traditional Minimate. His chest is just as detailed underneath the powerhouse cap as the cap itself, and the set includes plain Minimate hands and feet. There's no belt beneath the removable one, but he didn't usally wear one back in the day - that was Jim Lee's contribution. His non-standard hands are the clawed kinds used for various Venoms and whatnot over the years; why not give us the furry ones X3 Beast had? They would have been a better choice. His hair was new when this set was released. 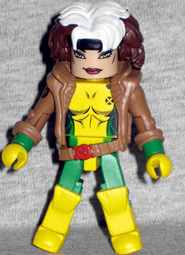 Unable to control her ability-absorbing mutant powers, Rogue was for a time haunted by the psychic remnants of victims like Carol Danvers, who was left in a coma after Rogue stole her flight, super strength and memories.

We've gotten Rogue in this costume before, but that was a long time ago and things have come a long way. Instead of simply being painted on, her boots now get the separate bootfronts that are held in place by the feet. Ditto the belt, which used to be painted and is now molded as part of the jacket. Her hair is a massive new piece, sculpted to fit over the collar of her jacket, and painted with her trademark white stripe. Well, it's a lot wider than a simple "stripe" by this point, and it doesn't run all the way down the length of her hair.

Rogue's expression isn't as exaggerated as the last version, but Beast is looking pretty good with his fangy underbite. These characters may not be ones you'd expect to see paired together, but they're both good figures.