The first official day of SDCC went off without a hitch, unless of course two-hour lines for toys can really be considered hitch-less 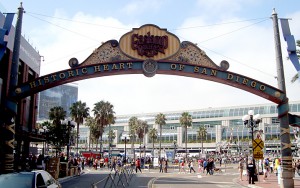 You'll excuse me, as I was out till 3am last night I went directly to beddy-bye and now am running quite late for Day 2, so this will be brief.

The core action of the day was getting Hasbro exclusives, which entailed waiting in a 30 minute line upstairs to get a "come back at 2pm" ticket first thing in the morning. Upon arrival at 2pm, I was told the "noon batch" were taking a lot longer than expected so come back at 3pm. Apparently a lot of credit cards were being denied, most likely because Hasbro is making charges through the home office in Rhode Island, so it's setting off all the credit card alarms (as happened to me last year). Regardless, it took an hour and 50 minutes from getting in line against the back wall to exiting the HasbroToyShop with my purchases. Rough!

Also was my first panel - the DC Direct one. Little in way of news or anything, but at least it was a toy thing.

The other big event was an 11pm showing of Captain America at the Horton Plaza movie theater. Suffice to say it was right good. Not great, but definitely up there with Iron Man in terms of enjoyment and shocking ability to actually make the story/character work on screen. Chris Evans was great and I very much look forward to seeing it again. Plus, to make things cooler we got a free Mondo-tees style movie poster! Too cool!

Various other highlights include some surprisingly high-quality Princess Bride statues and bobbleheads, a great Data bust, and Boba Fett/Wolverine costume. Score of the day: Tron 2.0 figure for $10/each. 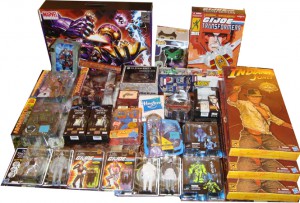