Included with each of the pieces of the ML2 Arnim Zola Build-A-Figure is a folded slip of paper bringing us "Tales of Arnim Zola," explaining who he is to new fans. We haven't bothered putting of that info in the various Series 2 reviews, but now we're putting it all here. 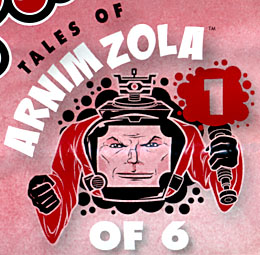 1 of 6
Captain America is no stranger to depraved villainous scum. He has encountered untold legions of crooked commandos, renegade madmen, and just plain bad guys in his unyielding pursuit of justice. But few can match the sheer demented insanity of the bio-fanatic known as Arnim Zola! His first encounter with the rogue geneticist was nearly his last... Deep in the jungle beside the notorious Rio de Muerte, Captain America was ambushed by the seemingly unstoppable genetic freak, Man-Fish! With the Avenger on the ropes, Arnim Zola appeared and took control of his creation only to summon two other mutated henchmen. The ensuing battle would be something Captain America would never forget and a fitting introduction to the terror that is Arnim Zola!
read more
2 of 6
A sickeningly disturbed commander of German forces during World War II, Red Skull has since proved to be one of the world's most diabolical villains. He met the deranged geneticist Arnim Zola during wartime and the two quickly allied over their common, twisted beliefs. Red Skull came to be the ultimate patron of evil, providing Arnim Zola with the bankroll he needed to continue his genetic research and experimentation. This investment paid off for the villainous benefactor. Arnim Zola used his crazed talents to transfer the consciousness of Red Skull into a new-and-improved body cloned from the super-soldier Steve Rogers!
read more
3 of 6
It was deep in the jungles of South America that Falcon and his ally, Captain America, first encountered the deranged geneticist Arnim Zola and his maniacal mutant monsters. Falcon, flying separately from the First Avenger, discovered a nest of some gigantic winged creature. Upon returning to her roost, the massive avian beast spied Falcon and launched an attack, locking the hero in a battle for his life. Busy on the jungle floor fighting Man-Fish and other killer creations, Captain America was unable to assist his comrade. But the heroic Falcon could not be defeated! Arnim Zola would have to wait for another time and another place to challenge this hero's might!
read more
4 of 6
Thrust into the past, Deadpool and his dim-witted cohort Bob, find themselves smack in the middle of World War II, fighting alongside Captain America and Bucky. Their only hope of returning to the present? Locating Arnim ZOla and the time machine he is supposedly developing. But the bio-fanatic has other ideas... His latest creation, a massive rubbery-armed menace, is brought to life and ordered to destroy the heroic quartet. Arnim Zola has once again unleashed a genetic aberration to do his dirty work - but he didn't plan on Captain America teaming up with the Merc With a Mouth... Deadpool!
read more
5 of 6
The dawn following M-Day was one of the darkest the world's mutants had ever witnessed. The vast majority awoke to find their abilities - what once had made them so powerful - had simply vanished. It was the genius of Hank P. McCoy, otherwise known as Beast, which held the sole hope of discovering a cure. Beast consulted with the world's brightest scientists, toiled for countless hours in his lab and risked everything on dangerous field excursions... Failure was his one and only result. Out of options, Beast was forced to turn to some of the Earth's most villainous scientific minds. It was then he asked for help from none other than the bio-fanatic himself... Arnim Zola!
read more
6 of 6
Violent, deranged, intelligent and wealthy. Such are the words that describe the most twisted man to emerge from two world wars... Baron Strucker. His criminal organization (known to the world as Hydra) is a true threat to any peaceful and just society. Funded from much of its founder's personal fortune, Hydra possesses some of the most cutting-edge weaponry and scientific laboratories known to man. It is those labs and with modified versions of those weapons, that the bio-fanatic known as Arnim Zola plied his abominable trade: unrestrained genetic experimentation!
read more

1 Response to Tales of Arnim Zola