A few weeks ago, Don Levine - the man who created GI Joe (and thus the concept of "action figures" as a whole) - died from cancer. Now an interesting piece of news has come to light via The Washington Post: in 2005, Levine was asked by the CIA to create an Osama Bin Laden action figure for propaganda purposes. 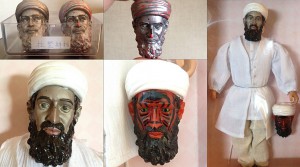 The project, codenamed "Devil Eyes," would have distributed thousands of OBL action figures with a special hidden feature: when the toys were exposed to heat, the face would dissolve and reveal a demonic visage beneath, with red and black skin and green eyes. At most, a few hundred of the figures were produced and sent to Karachi - the CIA says it only knows of three prototypes that were made before the project was discontinued.

When Levine's family was contacted, they said "Don Levine was a dedicated Patriot, and proud Korean War veteran. When called on, he was honored to assist our country."