Survival Tip: Dispatching zombies is best done in pairs. That way, one

of you can distract the zombie while the other goes in for the kill. Zombies can't focus on more than one target at a time.

We've got to admit, it's kind of cool that Art Asylum does these "survival tips" for the zombie Minimates, since it's not like they really have individualized bios. This zombie (who I'd say is more "French" than "Sailor") comes from the cover of Hardcover Book 3. He has a black and white striped shirt, and is wearing a red neckerchief. The majority of his wounds - the torn mouth, the damage to his torso, the utterly destroyed arms - have been made up for this Minimate, but it all looks good. He does come with a pair of normal arms, if you prefer. But why would you? 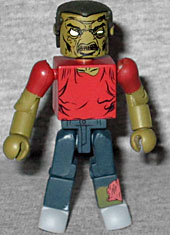 in groups as small as two or as large as 100. So you should never assume a zombie is alone; there is probably another one nearby.

This zombie, based on the first one Rick sees in the comic, was called "the 'Cute' Zombie" when the series was solicited (because back then, he had a logo on his shirt which read - appropriately enough - "Cute"). He was also shown with a new lower leg that was sculpted with damage, but on the final product it's just painted. Clearly the budget didn't work out. The left shin is just about the only part of the zombie's body we never see in his three-page appearance, which may be why AA chose to place his catastrophic injury there. He has dark hair, and is painted with blank eyes.
Next