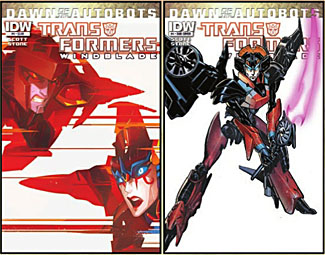 the last refuge she has left, the living city Metroplex as his malfunctions intensify! Windblade realizes that even if she survives Starscream, Metroplex himself may doom them all!

Cover A this month follows the trend from last month: a blank white background, duotone figure(s), and then red stripes over it all; but this month the stripes run horizontally instead of vertically. It's nicely allegorical, too, with Starscream and Windblade literally headed for a collision. Cover B and the retailer incentive are both done by Phil Jimenez in the "this is going to be on the reprint cover included with the toy" style. 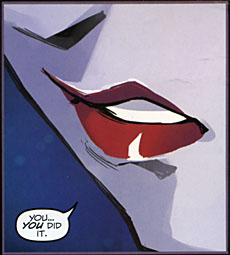 This is the final issue of Windblade's initial miniseries, which means the mystery is resolved - but the end of the mystery doesn't the end of the story. Heck, the last page of the issue doesn't even mean the end of the story, because Mairghread Scott has just dropped a giant stone into the smooth, still water that is Transformers IDW continuity - there are bound to be ripples - and this little four-issue series may have just changed the direction the entire story goes from here on out (though it's similar to one a different continuity has taken before). 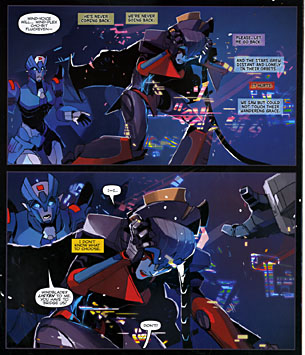 But this isn't isn't just an excuse to throw big ideas at the wall. The action is excellent and surprisingly brutal, and the characters' motivations are consistent with what we've seen in the previous three issues. And speaking of which, you're going to want to re-read the run, to pick up on the foreshadowing. It's all there, and it pays off nicely this issue. 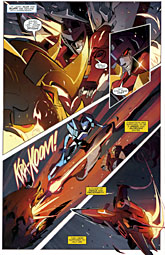 The slight sketchiness some of Sarah Stone's art last issue is gone, so we're back to the smooth, semi-Animated look that's served the title so well. And yet the panels are much less constrained to the grid this month, reflecting both the frenetic action and the shocked mentality of the characters. And the end of the book is a full-page splash that's absolutely beautiful.

Scott goes back to playing with the colors, 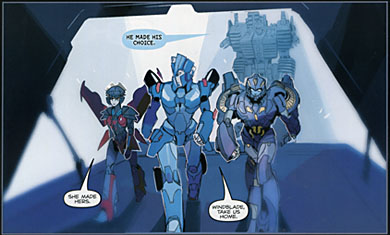 as well. The story takes place over a very short period of time, and it's at night, so things are necessarily dark, but that gets broken up by a few panels that, like the cover, have a bare white background to emphasize the action. Plus, we get a return to Metroplex's infinite brain, which also means a return to the cacophany of colors used to portray his multiple trains of thought. And for the flashback scenes, the muted blues make it clear we're no longer in the present tense.

Transformers: Windblade has been a wonderful series, rising above the idiocy that was directed at it before the books started shipping. The characterization, both of new characters and old favorites, has been spot-on, and the plot was fun and exciting. On top of all that, the artwork has been gorgeous every month. Issue #4 is the end for now, but Windblade will be back soon enough.