Our first Horror Classics Mystery Minis review was one of the largest figures. So it only makes sense that our final one is among the smallest. 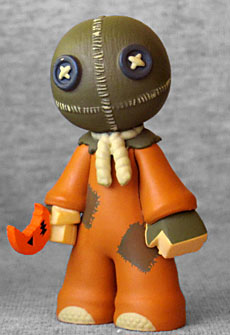 I'd never heard of Trick 'r Treat until NECA released their Sam figure in 2009 - and yet now it's one of my favorite horror movies. Sam is the spirit of Halloween, going about in disguise to make sure everybody is following the rules. He's wearing his footy pajamas (complete with little nubbly sections over the toes), and his hands are painted to look like he's wearing fingerless gloves. He's not dragging his sack around, but he does have his jack-o'lantern lollipop with a big bite taken out of it - solid orange, rather than translucent, but there's still a bit of black paint for the eye and what's left of the mouth.

Sam's big spherical burlap head has a bit of a texture to it, and the stitching is raised. The rope tied around his neck is big and chunky, and the bottom edge of the mask is slightly ragged. While they did make his button eyes (and the stitches holding them on) raised elements, the ones on his backside are just painted. Really? Every Walking Dead Mystery Mini can have sculpted pockets, but Sam can't get his buttflap? I call shenanigans! Poor little guy's not even 2¼" tall, so it's not like the extra plastic was going to bankrupt them.

It was a year ago that Trck 'r Treat creator Michael Dougherty announced that, half a decade after the first movie went straight-to-DVD, there's going to be a sequel. Sam was definitely one of the Horror Classics Mystery Minis I was hoping to get, and it's terrific to be able to review him today, of all days.