It's her! The character who started this whole Bombshells thing! 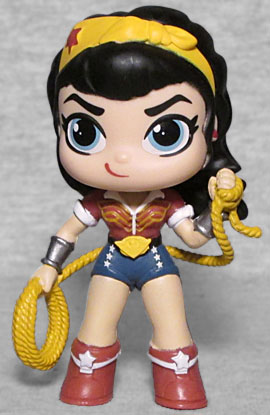 If you're going to do WWII-style pin-up characters, then it's just natural to use the character who was actually around during World War II. Well, technically a lot of these characters were around during World War II, because DC was already publishing them, but we're coming from a story perspective, not a real-world one. Like, Catwoman was introduced in 1940, but no one is writing stories in the main continuity about her fighting Fifth Columnists, y'know? But Wonder Woman? Depending on which reboot DC is using this week, it's entirely possible she would have crossed paths with Steve Rogers on some muddy Belgian battlefield.

Like the normal Diana, this one ran away from her island home when she realized the scope of the war that was affacting "man's world," defying her mother in the process. She begins fighting on the side of good, but when she objects to the execution of captured prisoners, General Sam Lane has her thrown in prison. Yeah, like that's going to stop her! 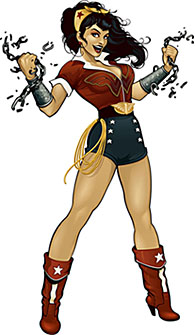 Wonder Woman is not shown in the "chain shattering" pose of the original art and statue, because the giant head of Mystery Minis probably means she'd fall over if they tried it. Instead, she's got a simpler stance, standing there with the end of her golden lasso wrapped around one hand and the rest coiled in the other. She also doesn't have the amazing smile, just a jaunty little line. Her costume consists of a yellow bandana taking the place of her usual tiara, a red shirt with white cuffs and collar, blue hip-huggers, and red boots. Because she's Wonder Woman, she's also got her silver bracelets.

The DC Bombshells Mystery Minis are packed in a 1:12 ratio, but there's no set layout for the figures. I got Wonder Woman from the bottom row, back left corner.