Funko has a new series of Mystery Minis based all on 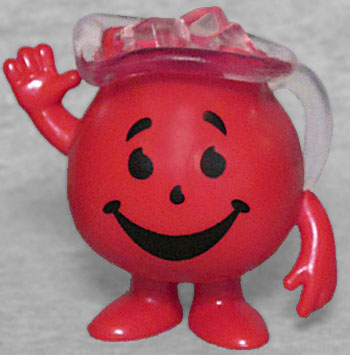 various mascots. Not sports teams, but commercial mascots; Ad Icons. There are lots of cereal mascots (including the General Mills Monsters in incredibly frustrating numbers), some for candy and snacks, and the world's most famous glass-based pitchman.

Kool-Aid Man was born when art director Marvin Potts watched his young son drawing smiley faces in the condensation on a frosty window. General Foods had just purchased Kool-Aid from its inventor and had a slogan to promote it, but needed an ad campaign to go along with it. For two decades, "Pitcher Man" was just a normal-sized jug with a face on it, but in 1974, he became the bipedal, six-foot-tall Kool-Aid Man.

Constructing a character who's supposed to be made of hollow glass is not easy, 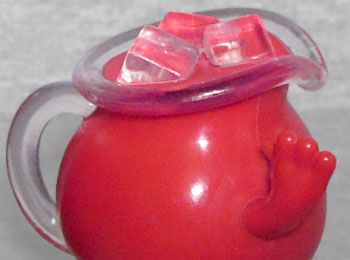 from an artistic standpoint: do you mold the whole thing clear, then paint the insides? That'd be one way, but Funko opted to make the body from red plastic, then use separate pieces of clear plastic glued in place to create his handle and the upper rim of the spout. The top is painted red, so it looks like we're seeing his juicy insides, but the three ice cubes that form his brain(?) are left unpainted, making them look more realistic. Did you ever notice that Kool-Aid Man functions like a Japanese kappa? An open spot on top of his head that's filled with liquid, and if that should ever become empty, he'd die.

It would be fun to have a 6" scale Kool-Aid Man who could burst through walls to bring refreshment to, say, Batman, but for now this little Mystery Mini is a cool piece.