I decided to sleep in a bit and hit the show a little after it opened to skip the fun of line-waiting, as there is so very much of that at SDCC these days, so I grabbed a quick breakfast after parking then moseyed over to the Convention center. 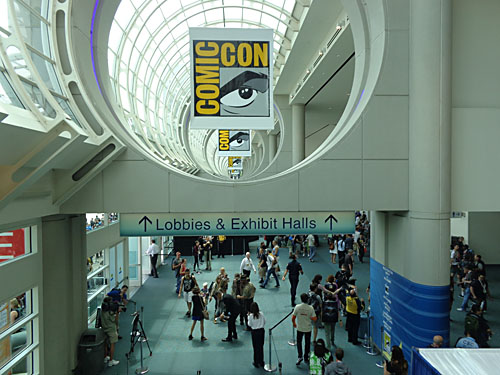 I'd skipped the Mattel booth last night, because it's Mattel (what would they even have to show?) but had seen plenty of new stuff online so I headed there first, and sure enough... they're bringing 6" DCUC figures back to retail. Weird. And since the retail team is too good for the nerds at Comic Con no one in the booth knew any details, etc., about what the eff was going on or what the eff we were looking at. So... great. After a quick tour of the floor (yep, Funko line is capped) it was upstairs for an inconveniently early panel for DC Collectibles only one short hour after the beginning of Comic Con.

After that, it was back to the floor for a little bit before the next panel. The Weta booth had a bunch of full-scale armor from the new Warcraft movie on display, which was pretty damn impressive in person (though I must confess it's a bit too fantastical to be as engaging as their work on Lord of the Rings or Narnia). Next door was Gentle Giant which was showing off micro versions of Super Powers and Secret Wars though between the minuscule size and attached bases on the former/bobble-heads on the latter I can't really imagine these will be that appealing. GG is owned by a 3D printing company so a chunk of their booth is dedicated to their parent company's offerings, and they they Cube printing printing off Terminator Endoskeleton skulls, which was actually pretty neat to watch (for a bit). Then, it was time to head back upstairs for the Jakks Pacific panel.

Next it was off to the Con Suite to get a little writing done and take a bit of a break! It was annoyingly in the Hyatt this year rather than the Marriott next door to the Convention Center, which is probably the result of the North wing of the Marriott being razed and currently under construction "for bigger/better things in the future." After an hour or so I headed back over the Con and hit up some more booths. One of my favorite booths at the show is PropStore Auctions' and the real highlight of their stuff, for me, this year was a casting of Sebastian Shaw's head with his Anakin Skywalker prothetics! Too. Damn. Cool!!! Nearby there was a booth featuring a bunch of Back to the Future stuff, but I never went it because I couldn't figure out what they were about and I was intimidated by seeing Master Imagineer Tony Baxter (pictured in the dark shirt) talking to them when I walked by (Baxter is the guy behind Big Thunder Mountain, Splash Mountain, Indiana Jones Adventure, and so, so, so, so, so much more). So instead I went and did some shopping, including being able to walk straight up to the register at Entertainment Earth (apparently the daily long line was just for the 30" Hologram Vader!?) and easily buy their exclusives.

As the show wound down for the night I decided to leave a little early to head over to Super7's MotU pop-up store: Skeletor's Lair. To get there I passed by the Hard Rock Hotel, which was all decked out for the new Lego Dimensions game, complete with a giant statue of Homer piloting a Ninjago mech while Wonder Woman stood atop hoisting up the Mystery Machine upon which Gollum was perched. Okay. Anyways, to "get in" to the Lair you needed a "Skeletoken" given away at both Super7 and Mattel booths, and it said to go to 7th & Island, but the store was actually at 8th & Island, so that was a little annoying in the evening heat and hauling a bag full of toys with me. After a brief wait I was in. It was a tiny little store but nicer looking though less themed than I expected. The goofy "test shot" figures they were selling were actually the giant scale which somehow made them cooler to me and I would have been a little tempted were it not for the price and space-requirement. I was very bummed to find out that they were out of the M.O.T.U.SCLES figures, which Shocka was after, because Comic Con has "lost" their palette of them - "so check back tomorrow..." I did get myself a pack of the Kenner style figures, though. My favorite thing, though, was the mounted Battle Cat head behind the registers.

After that it was time for a long dinner with friends before heading back to the hotel and hittin' ye olde hay. After all... Friday was the day I vowed to wake up early for a Hasbro ticket... 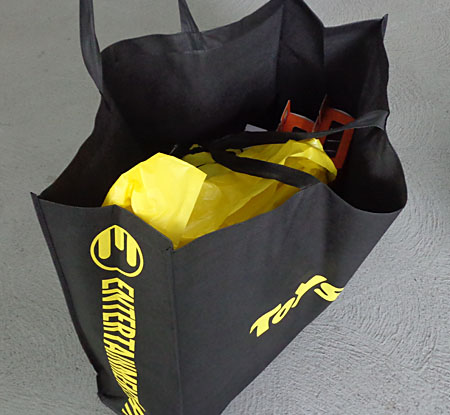