Playmates hosted a panel for their Teenage Mutant Ninja Turtle toys, and it was kind of awful.

I only have one note from this panel:

Mindnumbing in its Marketing/kid focus

It was a pretty tedious experience. The panel was a loaded with Marketing majors who were completely ignorant of their audience. They labored on the ancillary lines focused entirely on sub-teen demographics while using very Advertisement/Sales jargon and the kind of semi-condescending coo-ing generally reserved for parents who totally underestimate a child's intelligence, basically selling hard to parents who listen to toy companies when it comes to what kids like rather than listening or talking to their own children. Then they breezed through the action figures very quickly, almost in retaliation for the audience's disinterest in their presentation and product. There were maybe three kids in the audience versus 20+ adult collectors - so it's very nice that the team tailored the presentation to the minority. But that was ultimately the point of the panel - Playmates does NOT care about collectors. That was abundantly clear - especially after a question about the "Classics" figure and got a very broad, brush-off response like "they're on hold while we rework that line... stay tuned." So... fortunately they make weak enough product that it won't be hard to stop supporting them.

The only things of note to toy collectors are new figures of Mondo Gecko, Mutant Shredder and Fugitoid, plus some related figures of the Turtles in their Dimension X/Space gear. Target will be getting an exclusive 5-pack with the Dimension X gear on the four turtles and Fugitioid all vac-metalized. Walmart will also be getting an exclusive Triceraton and Lord Dregg (though maybe it was just an "exclusive first release" and they'll join the line later).

There is going to (FINALLY) be a "History of the Turtles" box set featuring the signature figure of Leonardo from EVERY ERA of TMNT (except for the 2007 movie as a result of the tooling being too damaged to use [but this this set does well enough they would consider retooling the the figures for future sets - plus the bases are all individual and interconnectable so, conceivably, they could release an '07 Leo and have it plug it easily to this set]). It'll be a Toys R Us exclusive and retail around $90 +/-. 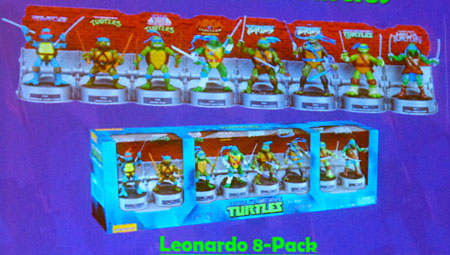 Casey Jones will be getting a Zamboni vehicle with an exclusive repaint of him sans warpaint, and a cool-looking Fugitoid ship is on deck too. Plus, a new version of the Pizza Thrower vehicle is coming.

The Half-Shell Heroes line continues with some new variations of the Turtles and the return of Turtle/Dino packs.

This entry was posted in Playmates, SDCC and tagged SDCC 2015, TMNT. Bookmark the permalink.