This is the third time we've reviewed a Marvel Legends Scarlet Spider, and all three of them have looked drastically different. 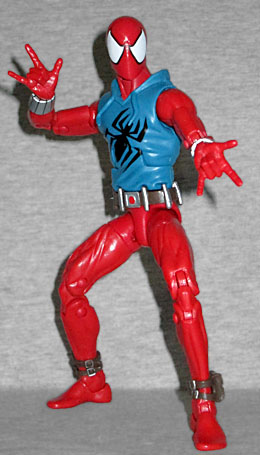 Cloned to destroy Peter Parker, Ben Reilly chose instead to fight alongside Spider-Man!

The figure is mostly built on the new Spidey body, though the torso is new: since Ben's "costume" was just a sweatshirt he got at the Natural History Museum, the only ways to make it are softgoods or a new sculpt. This was the wise choice. The hoodie has twisting wrinkles, loose drawstrings, and of course a hood laying down against his back. The lower edge has indentations to accommodate the capsules on his belt. He has separate pouches strapped to his ankles, and his silver webshooters. The bracelets are smooth, with black paint apps on to suggest panel lines - sculpted lines would be better. While his torso still has a hinge, it doesn't get the lateral shoulder joints. Why isn't Ben as limber as Peter? Just pretend he's out of practice after years of letting his spider-skills atrophy.

The head is a new sculpt - it's not the weird shape of the one they'd been using before (thank goodness), but the eyes are bigger than the ones on his "brother." Remember, this was the '90s, right after McFarlane and Larsen left, so the artists were doing their best to copy the Image guys' style. The edges of the lenses are sculpted, not painted, so it will be interesting to see if this head gets used for anyone else in the future. 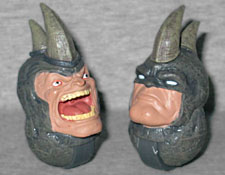 Scarlet Spider comes with the same six hands as Pete - two fists, two webshooting, and two wall-crawling - plus two parts of this series' Build-A-Figure. Two! Rhino is going to have your choice of heads: one with a bare face and a wildly insane look, the other calmer and with a mask that comes down to his nose. It's surprising that these aren't balljointed at the neck, but rather swivel/hinged; are we going to be able to swap them out easily, or will the pegs need to be shaved down like the Allfather's?

This is only the second 6" Scarlet Spider to ever be made wearing this costume - his most iconic. The first was a KB Toys exclusive in 2003, part of the Spider-Man Classics series; in fact, he was a repaint of Black Costume Spider-Man with a softgoods sweatshirt. Can you believe we've had to wait a dozen years to get something better than that?