After a savage beating at the hands of the Sinister Six, a half-dozen 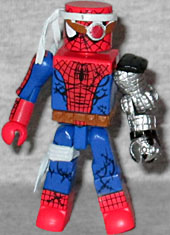 of his greatest foes, Spider-Man was given a cybernetic arm and eye piece to allow him to continue his pursuit of the band of villains.

Aww, that's a shame, they gave away the gag. In the issue, Spidey wakes up after his butt-kicking to find Cyborg X has apparently given him robot bodyparts, not realizing his metal arm is really just a fancy cast to help his arm heal. That doesn't quite explain the big white tourniquets on his head or leg, but whatever. The set includes a normal arm to replace the metal one, but it's hard to have a "plain" Spider-Man with stitches painted all over his costume. The arm and the eyepiece are new pieces, and look just like the comic did.

Melissa Gold was once known as Screaming Mimi, a sonic-powered 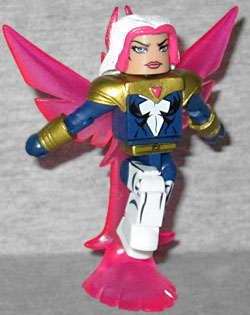 member of the Masters of Evil. When the Masters pretended to be heroes as the Thunderbolts, Melissa got a new costume and a new name.

I once made a custom Songbird Minimate, but it was nowhere near as good as this. She has a purpose-made shoulder pad, and very intricate apps to create the blue-and-white pattern on her suit. Her hair is white with pink stripes in the front. Her gloves have been seen on a Sentinel, among others. To show her powers (like Klaw, she can turn sound into solid shapes), she comes with a big translucent pink set of wings. There's a hole in the center, and a peg sticking out of her waist that plugs in to hold her aloft. I'm not sure about the stern look on her face, but overall she's good.

Like most modern Minimates sets, these figures come with clear disc stands. Weirdly, they're two different sizes - Songbird's is normal, but Spidey's is tiny. Wonder why?