The fifth MotU Minis release breaks tradition, by not having a hero and a villain. At best, Zodac the Cosmic Enforcer is neutral; at worst, he's a villain. Rarely was he depicted as a good guy, and even his own package described him "using all the 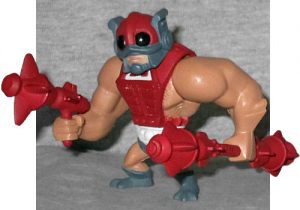 evil power at his command" to attack the Heroic Warriors. We said these things could change until the last second, but Zodac went beyond that.

This is the original Zodac, not the superior 2002 Zodak. For one thing, he's white. For another, he doesn't have any fun glowing tattoos. His arms and legs are the same as Scareglow's, but his chest and head are new. His silly helmet really works nicely in this super-deformed style! He's armed with the vintage '80s space pistol, but he's also got the 2K2 battle staff. Unfortunately, it's 3¼" long, so with only swivels at the shoulders, there's no way for this 2⅛" figure to hold it comfortably.

In the '80s, Zodac shared his chest mold with Beast Man, so it makes sense that this release pairs the two. In the grand scheme of things, Beast Man is even more important than Mer-Man - after all, for all the changes the movie made, 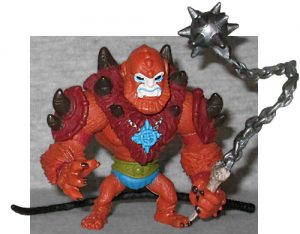 Beast Man was one of only two henchman who made it to film. He may not have looked like himself, but he was there.

Beast Man's usual look is orange fur, blue underwear, and red armor, which is exactly what this mini delivers. The fur on his body is sculpted, as is the fur on whatever that thing he wears on his chest is. He has studded wristbands and a spiked knuckle weapon on his left hand. His face is white and blue, and the sculpted chain that holds his blue medallion is carefully picked out in silver. He comes with both his '80s-style black whip, and an '02 version that's more like a morningstar, with a chain connecting a bone handle to a spiked ball.

To help sell the MotU Minis, Mattel included a pice of Castle Grayskull with each set - buy all six, and you can build a complete facade. (Not to be confused with the complete facade of Mattel claiming these crummy sets were worth $20 apiece.) Set #5 includes the matching piece to Set #2, the rocky base of a tower.

Zodac can't hold one of his weapons because he's too short. Beast Man can only hold one of his wearons at a time because his other hand is an open claw. The theme of this set is apparently "lay some accessories on the floor." You can always count on Mattel to live down to expectations.