When Bruce Banner's gamma-fueled Hulk powers are drained from him, 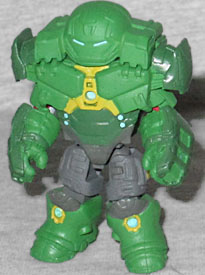 he modifies Iron Man's Hulkbuster armor in order to assist the Avengers.

Hey, too cool! When Rustin first revealed this figure during his live-on-the-spot coverage of this year's C2E2, that was my guess for the reasoning behind it! This set, like all Walgreens' exclusive Minimates, is based on Marvel's cartoons, so maybe the episode of Avengers Assemble where this happened had already aired, but I haven't watched it: that means the show's creators successfully came up with a design that, viewed absent any in-universe knowledge, still manages to convey complete information at a glance. And that takes skill! 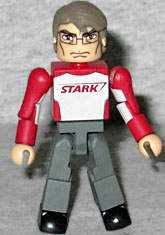 The figure uses the same molds as Avengers 2: Manchester United 0 Hulkbuster Iron Man, just painted in more "Hulky" colors. The torso is various shades of green, with a band of yellow right around the arc reactor, while the legs are grey (because if they'd been purple, like his pants, people would assume this was Lex Luthor). Of course, if you strip all that armor off you're left with a plain Bruce Banner, wearing grey sweatpants and a long-sleeved shirt he apparently picked up at the Stark Industries giftshop. The set includes extra hands and feet for him, and a piece of brown hair for when his head is not being swallowed by the armor.

Like the Hulk, Samuel Sterns has been altered by gamma 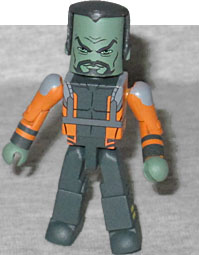 radiation, but in his case his brainpower has been increased, making him an evil genius.

There have been approximately 100 series of Marvel Minimates, and yet this is only our second figure of The Leader. That's unthinkable! That version had a unique noggin with its fivehead and hair all molded as one, while this one has a tall head and separate hair (which, surprisingly, is not the Sinestro hair from all those years ago, but new). His costume is a more modern style, still orange, but now with a lot more dark grey added on. The apps go all the way around the body, and are detailed just well enough to make the toy look very nice. You could work this into a comic-based collection quite easily.