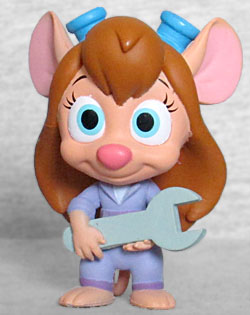 Gadget Hackwrench is not the typical '80s cartoon girl: she's the team's smartest member, with a "mind-bashingly high" IQ, and builds all their equipment, usually from whatever garbage they can find lying about. She's also easily bored and tends to pay attention to her own interests more than anyone else, so she doesn't have to serve as "the mom" to all the boys on the team. It also explains why she seems oblivious to the fact that Chip and Dale keep fighting for her attention (Monterey Jack, by contrast, seems to look on her like a daughter, since he was friends with her dad). And so an entire generation of kids developed crushes on intelligent, quirky girls.

Gadget's personality was based on Jordan Cochran from the movie Real Genius,

but not her appearance. Gadget was present in the original pitch for the show (which wouldn't have featured Chip or Dale, but rather a mouse named "Kit Colby"), and the only difference between that version and the one we eventually got is that her fur would have been white, rather than pink. Wait, pink? is that skin? If not for her purple jumpsuit, would Gadget be completely nude? Her sandy-colored hair is more brown here than it was on the cartoon, where it favored yellow. She wears a blue pair of goggles instead of a hair bow, and is hugging a wrench that's nearly as large as her entire body. She's available in a 1:36 ratio, so every three cases.