In our Immortan Joe review, we reported that all 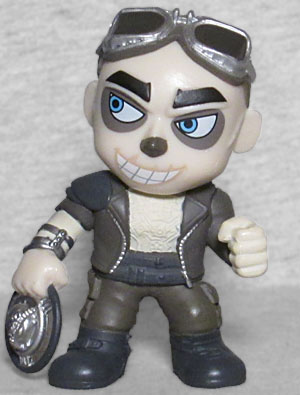 the Mad Max Mystery Minis were available in an even 1:12 ratio, because that's what the back of the box said. But it turns out that's not right - the ratios are all over the place, from the 1:6 Max and Furiosa to the 1:72 Doof Warrior. So thanks for that, Funko; you already made your toys a headache by doing away with the case layouts, and now we can't even trust the published numbers. Why, if we didn't know better, we'd think you wanted these blind-boxed toys to be unpredictable before we opened them!

Nux is the white-skinned War Boy who starts the movie tethered to Max, and there are two versions of him in this series: the one in this review, which is apparently actually 1:12, and a version that seems to be 1:24, and is a lot more naked. But ratios be damned, this is the cooler design.

This Nux is wearing the clothes he scavenged from Max, particularly that iconic leather jacket with the armored padding on the right shoulder. Since it's unzipped, 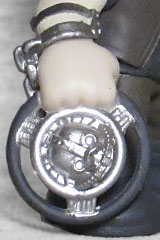 you can see the sculpted scarification his chest: a stylized representation of an engine block. The War Boys belong to the Cult of the V8, because they understand how to fix machines, but not how to fix their bodies; so they mark themselves with mechanical symbols in hopes of being more permanent than they are. He's wearing goggles pushed up on his head, has a manacle on his right forearm, and is carrying a steering wheel. There are scars on his cheeks, and dark circles around his eyes and on his nose to make him look skeletal. The mouth is kind of a weird smile - if I were inclined to use a phrase coined (as an insult) by a noted child rapist, I'd call it "CalArts style." But it works pretty well here, sort of a "what if Mad Max crossed over with Gravity Falls" look. And on the other one, the chrome makes Nux look like he has a Homer Simpson muzzle.