Jeepers, we've not written up the 4" Spider-Man Noir figure! So in light of today's review of the 6" figure and the previous review of the Minimate, let's us take a quick little gander at this funny little fella. 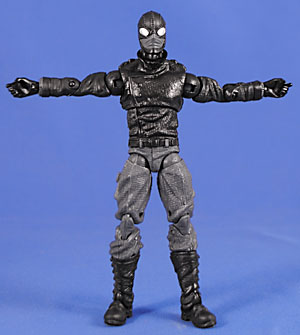 He came out in one of the later series of the ill-fated 4" Marvel Universe toyline, at that point rebranded with the insanely bad and horribly confusing name of "Marvel Legends Series" (which also happens to the current branding on the 6" line and the 12" figures and the high-end roleplay toys, so... genuinely - what the hell, Hasbro!?). Ye Olde Noiry comes with the cardback description of:

Peter Parker dons a trench coat and fedora in his alternate-dimension identity as Spider-Man Noir.

This is fantastic because all it tells us about the character is that he wears "a trench coat and a fedora" - neither of which this figure is sporting... I ask again: what the hell, Hasbro!?

It is weird that he doesn't have those costume pieces or, especially, any accessories - particularly at the near $15 pricepoint the line was demanding at the time - but I suppose I can kind of forgive them since he's an all-new sculpt which is really nice and super detailed. Except that he isn't an all-new sculpt at all... he's a straight repaint of "Battlefield Captain America" (which was, in effect, the "Ultimate Comics" version of WW2 Cap) in the 4" toyline that tied in with the first Captain America movie

(or Captian America: The First Avenger for your franchise builders out there)... Other than the very basic black and gray colors, which are generally done simply with plastic rather than paint, the only unique thing about this figure is his head. It does fairly accurately capture the look of the character. I'm not sure if it's a different source material or what, but this head sculpt has the five stitched seams on the hood more spread out and it lacks the wraparound strap to clarify that the eye-lenses are goggles as seen in the images I can find. Given the 4" scale, though, and dark colors, it doesn't bother me all that much.

I picked this guy up for $5 at Five Below and I'm pretty happy with him for that price - but with such little effort put into releases like this it's no wonder that he, and the rest of the series, were major pegwarmers. 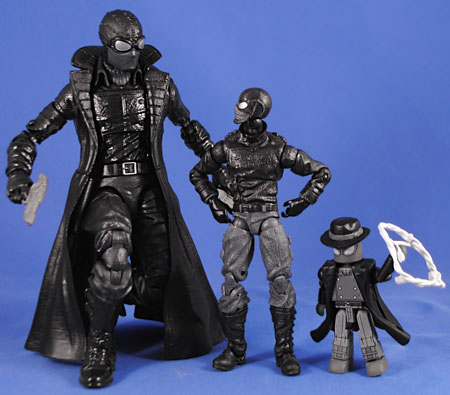 This entry was posted in addendums, Hasbro, Marvel and tagged Marvel Universe, Spider-Man. Bookmark the permalink.