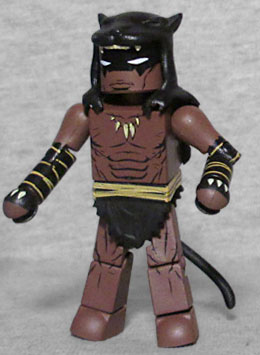 With his heightened agility and stamina, the earliest known Black Panther was a formidable opponent, especially when armed with claws on his knuckles.

We travel now, one million years into the past, when the "kingdom" of Wakanda was just a single cave. The first Black Panther's costume appears to be made from an actual animal skin, with a pelt draped over his shoulders and a tail attached to the back of his loincloth. His forearms are wrapped up in the skin, and the cat's claws tied to his knuckles. Since his cowl is just the upper part of the panther's head, the fangs from its lower jaw are now worn on a cord around his neck - probably made from sinew. The dark area on his face is meant to be a shadow, not war paint or something. And also his eyes probably aren't blank white in reality.

The ancient bearer of the Starbrand is a hulking, 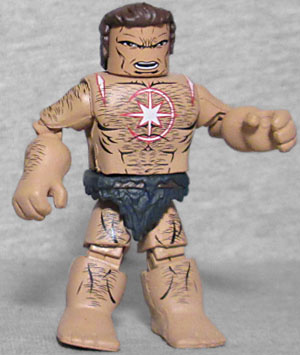 inarticulate brute, but he also possesses the Brand's powers of flight and energy projection.

Yeah, no worries if you aren't familiar with Starbrand - it falls into the same "trying to make fetch happen" category as America Chavez and the Inhumans. Originally introduced in Marvel's 1980s "New Universe" imprint, it's since been adopted into the 616 reality as a sort of "planetary defense system," where whoever currently bears the mark is responsible for Earth's safety. And since the brand can be passed between people as needed, bingo, you've suddenly got a legacy character! This one appears to be a Neanderthal (or something), and uses all the same bodyparts (and even loincloth) as Barbarian Hulk to show that size. He has lots of hair painted on his body, in addition to the glowing Star Brand. His face is too human, though - they should have given him a thicker brow.