Ace Air Force pilot Carol Danvers becomes one of the universe's most powerful heroes when Earth is caught in the middle of a galactic war between two alien races. Set in the 1990s, Marvel's Captain Marvel is an all-new adventure from a previously unseen period of the Marvel Cinematic Universe. 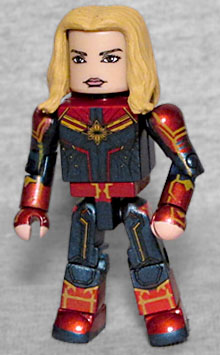 With Toys Я Us extinct, Walgreens has gamely picked up the slack when it comes to movie Minimates. There will be a Captain Marvel box set later this year, but there are four exclusive two-packs at the drug store right now. This one, logically, features Captain Marvel! This shows her in her standard red-and-blue costume, though it has more tiny details here than it did in the comics. And also it's done in metallic shades, because flat colors don't work as well on film as they do on the printed page. Carol's got long hair, which must get snagged when her battle helmet armors up and turns it into a mohawk. (The set does include an alternate helmet/hair piece, if you want her to look like that, plus a flight swoosh so she can take to the skies! Surprisingly? No fist-energies.) 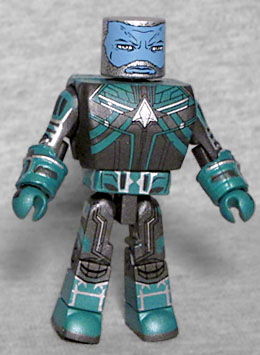 The second figure in this series is Bron Char, a character from the comics that no one has ever heard of or could name without looking him up. He was part of a group of Kree who set up base on the moon and wanted to evolve humans to be more like Kree. Bron was the team's muscle, being a nearly Hulk-sized character who was way stronger than the rest of them - and Kree are already way stronger than humans. This Minimate uses a waist extender and a powerhouse chest, but the only sculpted parts of his green and silver Starforce uniform are the gloves. He's got blue skin, but the silver hair just makes him look elderly, not alien; he's played in the film by Rune Temte, who you best know from probably nothing you've ever seen. This really should have used the Mandarin beard.
Next