As of Series 2, there are 11 Transformers BotBots factions, but even in Series 1 there were already eight. Considering that most other TF franchises consider "three" to be an outlandishly high number, that's daunting! They all live in a single mall, and up on the second level is a sporting goods store, which is where you'll find Fit Ness Monster and the rest of the Jock Squad.

This is not a watch. I thought it was a watch, but I was wrong. It's 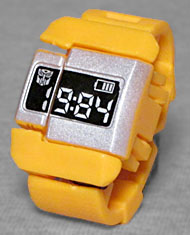 a fitness tracker - you know, a Fitbit. Which may look exactly like a watch, but isn't. I mean, it's got a face, it's got a band... it's pretty much a watch, yeah? The face has a battery indicator, an Autobot symbol, and the number 19:84, which obviously carries great meaning to Transfans: as everyone knows, the mark of a true Transformers fan is their adherence to French Revolution-style metric time. They can't get enough of it. Yep, it's 84 deci-minutes past 19 o'clock; time for Transformers! The watch band is yellow, but the promo shots (seen on the instruction sheet) show the entire face surrounding the screen being silver, but on the final toy large swaths of it are the same yellow. Too bad, because it looks better the other way.

It's easy to convert the figure: the legs fold out of the back, the unpainted parts of the watch face become the arms, and a flap lifts off the front to reveal the robot's face.

Fit Ness Monster does not believe in lazy. She will not stop until you shape up, tone up, bulk up, get ripped, get jacked, and get shredded. New get movin' 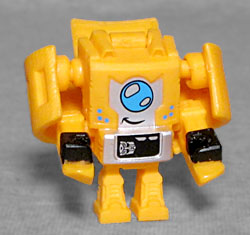 and put some muscle into it!

Geeze, Fit Ness, take it down a notch! I've got a friend who's a competitive bodybuilder - a champion, no less! - and not even he is that over-the-top! The referential name has no connection to the character, making it kind of a waste. The robot is very blocky, contrasting against the curved band, which goes nowhere in this mold and is left as just kibble. It hangs off the back, and if you flip the face-covering all the way back (as depicted in the art and looks better) instead of just leaving it hovering above the forehead (as given in the instructions), then the little bot becomes so back-heavy that she can't even stand up unless you stick her arms straight out in front of her. The face features a single large round eye and a little lopsided smile, and there are a few blue dots on the cheeks that end up looing like... freckles? Does this robot have freckles? 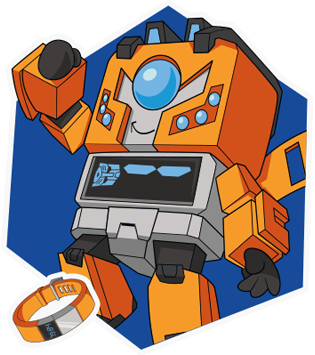