Transformers BotBots Series 3 introduces five more factions. And a whole new wing of the mall, of course, including a three-story arcade, where the Arcade Renegades hang out. Wrist Banned is up on Level 3. 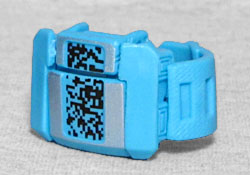 There are a daunting 72 new BotBots in Series 3, but again, fewer than half of those are new - we get a whole lot of repaints. A whole lot. For instance, this... wristband? I guess apparently family arcades these days use wristbands to accurately pair children with their guardians? That's what I've gathered from watching "Homer Goes to Prep School," anyway. Instead of numbers like Fit Ness Monster's, the face here has a QR code, but it still doesn't have all the silver paint that's shown on the instructions.

His conversion remains the same: the legs fold out of the back, the unpainted parts of the watch face become the arms, and a flap lifts off the front to reveal the robot's face.

Is there a problem here, tough guy? Wrist Banned didn't think so. 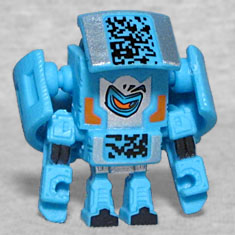 In his arcade, if you ain't on the list, you ain't in the game. This bullying bouncer bot is always on the lookout for VIBs (very important bots). He'll give them the red-carpet treatment and shove everyone else out of the way.

It's cute that the personality goes along with the "banned"/"band" pun from the character's name. He still has a single large eye, but it's bennt down in the center, making him look angry. There's no mouth this time, but a few wrinkles on the forehead. There are orange bars on the cheeks, matching the color of the eye. 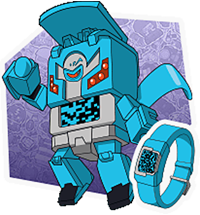 Wrist Banned is only available in the "Arcade renegades Surprise" 16-pack.