Be careful when you ask your barber to just take a little off the top. 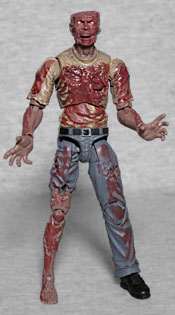 As this figure is part of Zombie Lab Wave 5, we can determine who he is - or "was," perhaps. The story on the back of his art card (Chapter 5) is all about Kobe abandonning his friends and luring women to dangerous locations (and other ESPN headlines from the early 2000s), so it stands to reason this is the single major zombie they encounter in the restaurant.

The figure has a quite interesting construction. He's had a rougher go of it than a lot of the other zombies - his shirt is ripped away, as is the flesh below it. If you look past all the blood on there, you can see his ribs. And while his left pantleg is mostly intact (there's just a little rip on the thigh), the right leg is all torn up, with not even a shoe remaining. That's a nice blend of pieces to create something unique. Environmental storytelling!

The head is new, and it's awesome. Almost every zombie in pop culture can be defeated by destroying their brain, but often that's just depicted as "injuring" their brain - look at The Walking Dead, where a simple stab to the head will stop them. In reality, humans get brain injuries like that all the time, and often continue to live full lives for years. This guy, taking a cue from Marvel Zombies Col. America, has a whole chunk of his skull lopped off in a clean, straight line, and he seems to still be fully functional. 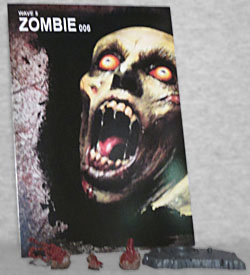 He comes with the same zombie accessories all the other zombies have been accessorized with: an arm to eat, a stomach to wear, and a broken spine to also wear, but not at the same time. The extra bodyparts really don't work on a figure that doesn't have a bare chest or some kind of jacket to hide the transition, and the clawing hands can't hold the snack arm. You know what would have been tops? The missing bit of his skull! Have it connect with a peg, if friction alone wasn't enough to do it. The art card is a close-up of the zombie's howling face, which could honestly be any zombie: there's no background to show us where it is, and we can't even see if its head is cut open.